Thousands of people have marched through Edinburgh in support of Scottish independence. 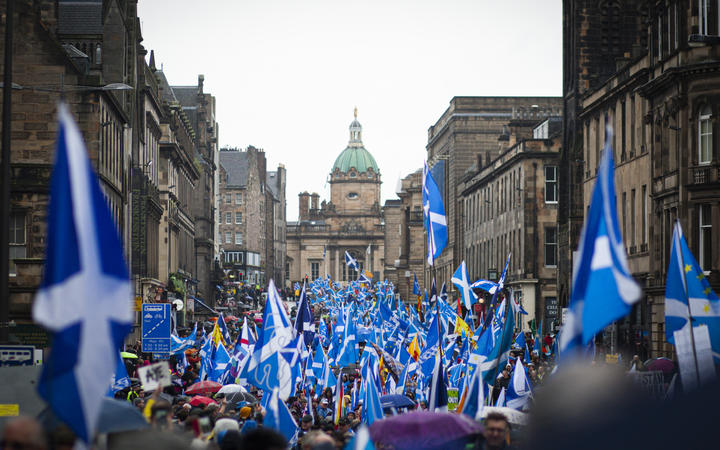 There was a carnival atmosphere as they waved flags and banners from Holyrood Park to a rally in The Meadows.

Joanna Cherry, the SNP MP who led the legal fight against Boris Johnson's decision to suspend parliament, is among those who addressed the rally.

Earlier Nicola Sturgeon tweeted to say she would be at the march "in spirit" but not in person.

"Be in no doubt - independence is coming", she added.

Organisers All Under One Banner (AUOB) said more than 200,000 people took part in the event.

Gary Kelly, of AUOB, said: "It's buzzing - the rain may be on but the people are not deterred.

"Our appetite for independence is still alive."

However, neither Police Scotland nor the City of Edinburgh Council was able to give an independent estimate of numbers.

Following a similar event last year, AUOB said there was a crowd of 100,000 but the council later estimated that 20,000 marchers took part.

Images show Edinburgh's iconic landmarks and streets packed with thousands of campaigners and a sea of Saltire flags. 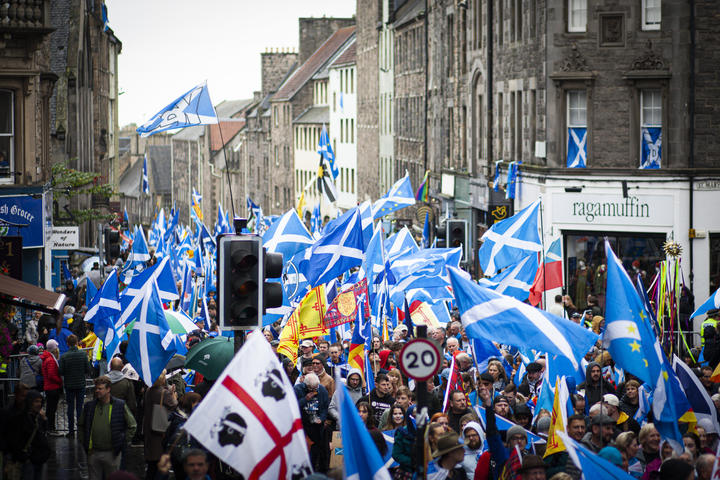 Chants of "What do we want? Independence" could be heard as marches made their way up the Royal Mile.

Harry Baird, 19, was among those taking part. He said he wanted to join what he believed would be the biggest rally in the country's history.

The apprentice marine engineer from Orkney said: "There's a lot more than I thought I would see, to be honest.

"Any change from what it is now would be worth it."

Gemma MacFadyen has backed Scottish independence since she was a child. The 34-year-old from Edinburgh said: "I'm here to support the cause for independence.

"To be honest, after the last referendum I was a bit deflated and disenfranchised and I was not going to be taking part anymore."

However, she said a recent trip to the west coast of Scotland "re-inspired" her, and so she decided to join Saturday's march.

She continued: "I've not really been caught up in the whole Brexit debate, I'm not bothered about that.

"But I am for another independence referendum, as soon as possible - it should've been ages ago."

Ahead of her speech to the rally, Joanna Cherry MP described the event as party for the grassroots supporters of the independence movement.

She told BBC Scotland: "I'm not expecting anyone's minds to be changed on independence today, that's done by conversations on the doorsteps.

"But this is one opportunity for the Yes movement to get together in celebration and despite the rain I think there's been a fantastic turn out." 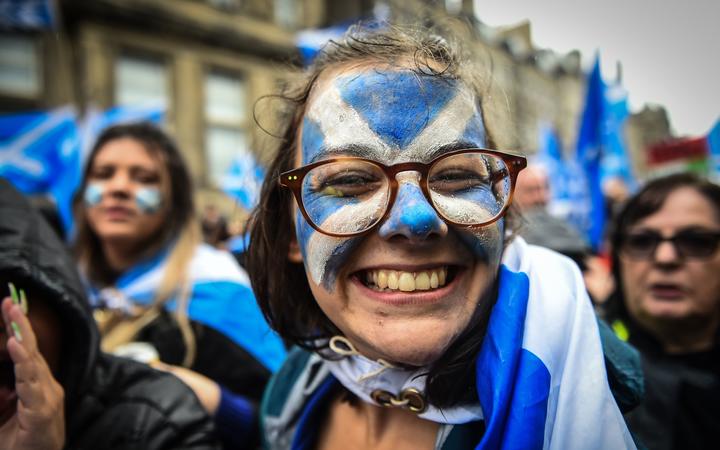 Earlier this year Nicola Sturgeon said she would demand Holyrood was given the power to hold a second referendum on independence.

The SNP is expected to put its opposition to Brexit and its desire for another poll at the centre of its manifesto in the event of a snap election.

But Boris Johnson outlined his opposition to the plan at the Conservative party conference, claiming more referendums would cause "total national discord".