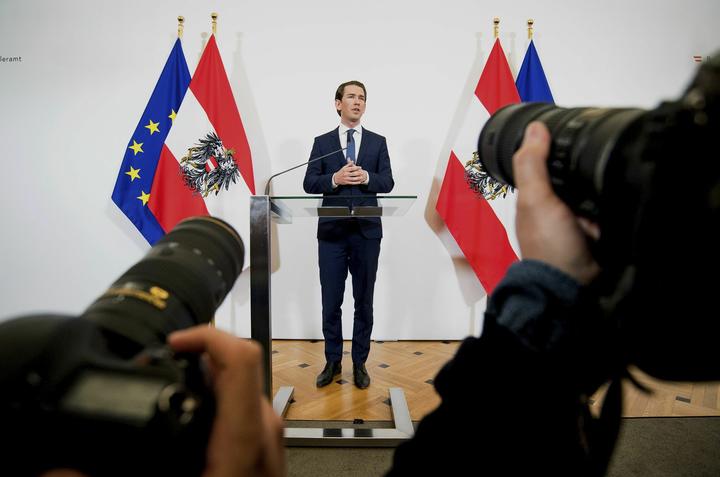 With nearly all the votes counted, Mr Kurz's party has more than 37 percent of the vote, up from 31 percent last time round.

His former coalition partners, the far-right Freedom Party, have received about 16 percent, a sharp fall.

The snap general election was called after a scandal caused the previous coalition government to collapse.

Polling stations opened at 7am local time on Sunday and closed at 5pm. About 6.4 million people were eligible to vote.

Despite the People's Party's strong showing, it will not have a majority in parliament and Mr Kurz will need coalition partners.

The 33-year-old could choose to renew his alliance with the Freedom Party - the source of the scandal - but may want to look at other options.

A three-way pact with the Greens (which received more than 14 percent of the vote) and the liberal Neos party (7 percent) is considered far more likely than a grand coalition with the Social Democrats (22 percent), but coalition talks are widely expected to be difficult, and may last for weeks.

Green leader Werner Kogler said on Sunday evening the party would need to see "radical change" from the right-wing policies pursued by the previous coalition.

What did the ex-coalition partners say?

Appearing at party headquarters to a rapturous welcome from party activists, Mr Kurz said he was "overwhelmed and almost speechless".

He added: "I would like to take this opportunity to sincerely thank all of our voters."

Norbert Hofer, leader of the scandal-hit Freedom Party, told reporters he believed the result meant his party would not take part in coalition talks.

"That means we are preparing for opposition," he said.

What was the scandal about?

It began in May when German media outlets published a video involving Vice-Chancellor Heinz-Christian Strache - then leader of the Freedom Party.

The sting video had been secretly recorded before the 2017 election at a villa in the Spanish island of Ibiza.

In it, Mr Strache is seen promising government contracts to a woman posing as the niece of a Russian oligarch.

A Vienna lawyer who says he was involved in the sting described it as a "civil society-driven project in which investigative-journalistic approaches were taken".

The "Ibizagate" scandal forced Mr Strache to step down and led Mr Kurz to end the coalition with the Freedom Party.

The country has been led by a caretaker government since June after Mr Kurz lost a no-confidence vote in May.

Despite the fallout, Mr Kurz appears to have emerged largely unscathed from the scandal.

Who is Sebastian Kurz?

The son of a secretary and a teacher, he became active in the People's Party at the age of 16.

As a law student in Vienna he was elected chairman of the party's youth wing. He quit his studies in 2011 to become a junior interior minister, rising to foreign minister in 2013 at the age of 27.

Two years later he presented a plan to improve the integration of immigrants. However, he was also full of praise for Hungary's populist Prime Minister Viktor Orban, and claimed credit for closing the Balkan migrant route in 2016.

Elected chairman in May 2017, he rebranded the party as the Turquoise Movement then served as chancellor from December 2017 to May 2019, when the Ibiza-gate brought down the coalition.