US Secretary of State Mike Pompeo has blamed Iran for drone attacks on Saudi oil facilities. 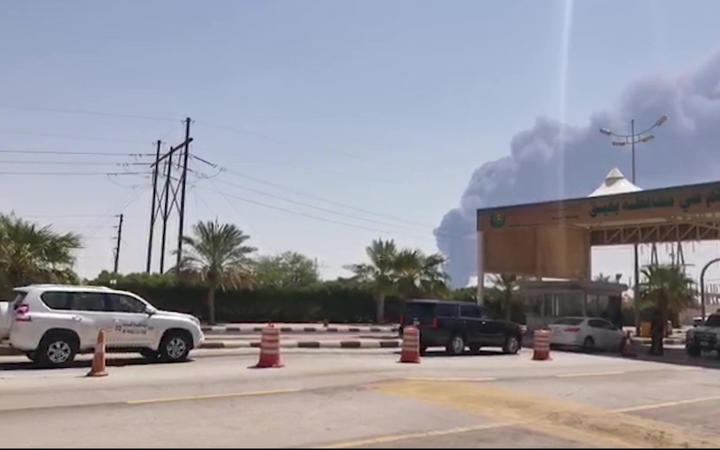 He dismissed a claim by Yemeni Houthi rebels that they had attacked the two facilities, run by state-owned company Aramco.

Saudi Arabia's energy minister said the strikes had reduced crude oil production by 5.7 million barrels a day - about half the kingdom's output.

Correspondents say they could have a significant impact on world oil prices.

If the rebels were responsible for the attacks, their drones would have had to fly hundreds of miles from Yemen into central Saudi Arabia.

Meanwhile experts are investigating whether the attacks could have been carried out from the north - either by Iran or its Shia allies in Iraq - using cruise missiles rather than drones, the Wall Street Journal reports.

Tensions between the US and Iran have escalated in recent months, since US President Donald Trump abandoned a deal limiting Iran's nuclear activities last year and reinstated sanctions.

What did Mike Pompeo say?

In a tweet, Mr Pompeo said there was "no evidence" the drones came from Yemen.

He described the attack as "an unprecedented attack on the world's energy supply". 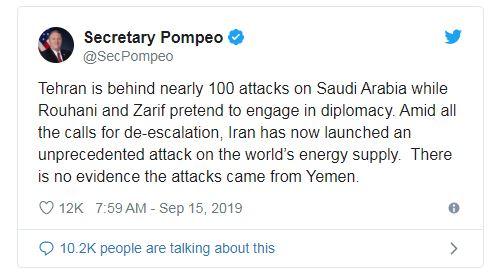 "We call on all nations to publicly and unequivocally condemn Iran's attacks," Mr Pompeo added.

The US would work with its allies to ensure energy markets remained well supplied and "Iran is held accountable for its aggression", he added.

The White House said Mr Trump had offered US support to help Saudi Arabia defend itself.

What do the Houthis say?

A spokesman said the rebels had deployed 10 drones in the attacks.

Yahya Sarea told al-Masirah TV, owned by the Houthi movement and based in Beirut, that further attacks could be expected in the future.

He said the attack was one of the biggest operations the Houthi forces had undertaken inside Saudi Arabia and was carried out in "co-operation with the honourable people inside the kingdom".

How has Saudi Arabia responded?

There are no details about the damage caused by the attacks but officials say there were no casualties.

Saudi state media reported that Saudi Crown Prince Mohammed bin Salman had told President Trump in a telephone conversation that the kingdom was "willing and able to confront and deal with this terrorist aggression".

Abqaiq is about 60km south-west of Dhahran in Saudi Arabia's Eastern Province, while Khurais, some 200km further south-west, has the country's second largest oilfield.

Saudi security forces foiled an attempt by al-Qaeda to attack the Abqaiq facility with suicide bombers in 2006.

Aramco is not only the world's biggest oil producer, it is also one of the world's most profitable businesses.

The Khurais oilfield produces about 1 percent of the world's oil, and Abqaiq is the company's largest facility - with the capacity to process 7 percent of the global supply. Even a brief or partial disruption could affect the company, and the oil supply, given their size.

The country produces 10 percent of the world's crude oil. Cutting this in half could have a significant effect on the oil price when markets open.

Who are the Houthis?

The Iran-aligned Houthi rebel movement has been fighting the Yemeni government and a Saudi-led coalition.

Mr Sarea, the Houthi group's military spokesman, told al-Masirah that operations against Saudi targets would "only grow wider and will be more painful than before, so long as their aggression and blockade continues".

Houthi fighters were blamed for drone attacks on the Shaybah natural gas liquefaction facility last month, and on other oil facilities in May.

There have been other sources of tension in the region, often stemming from the rivalry between Saudi Arabia and Iran.

Saudi Arabia and the US both blamed Iran for attacks in the Gulf on two oil tankers in June and July, allegations Tehran denied.

Tension in the vital shipping lanes worsened when Iran shot down a US surveillance drone over the Strait of Hormuz in June, leading a month later to the Pentagon announcing the deployment of US troops to Saudi Arabia.