Brazilian President Jair Bolsonaro has ruled out accepting a G7 offer of aid to fight fires in the Amazon rainforest unless he gets an apology from his French counterpart, Emmanuel Macron. 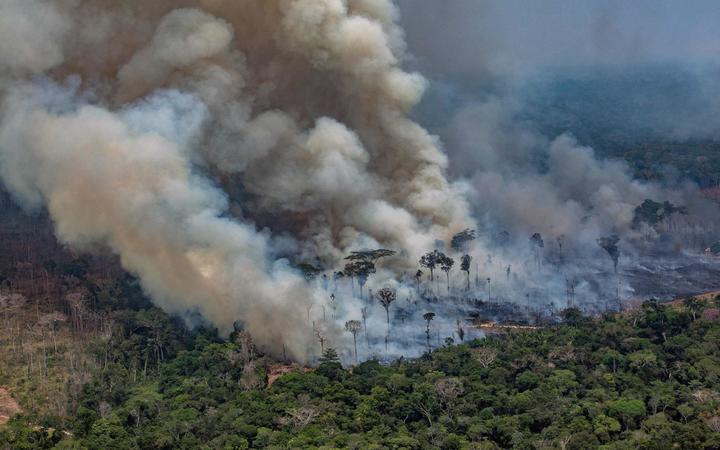 Mr Bolsonaro said the French leader should apologise for insulting him personally by calling him a liar.

Mr Macron had accused him of "lying" about fighting climate change.

Aid worth $US22 million was announced by Mr Macron at a summit in France of the seven leading industrial powers.

Satellite data show a record number of fires burning in Brazil, most of them in the Amazon region.

Earlier, Brazilian ministers said the G7 money was not needed and they accused foreign powers of wanting control of the Amazon.

Last week, Mr Macron said Mr Bolsonaro had "lied" to him at a G20 summit in Osaka, Japan, in June by failing to respect his climate commitments and by failing to pursue biodiversity.

Mr Macron said France would not ratify a huge trade deal with South American nations unless Brazil did more to fight fires in the Amazon.

On Tuesday, Mr Bolsonaro told reporters in the capital Brasilia: "Mr Macron must withdraw the insults that he made to my person. Firstly, he called me a liar."

"To talk or to accept anything from France, whether it be with the best possible intentions, he [Mr Macron] will have to withdraw those words and then we can talk," he said.

In another development, Mr Bolsonaro responded to a joke on Facebook mocking the age of Mr Macron's wife Brigitte who, at 65, is 25 years his senior. He wrote: "Do not humiliate the guy, ha ha."

Adding to the row over the aid offer, Mr Bolsonaro's chief of staff, Onyx Lorenzoni, mocked the fire that ravaged Notre-Dame cathedral in Paris in April.

"Macron cannot even avoid a predictable fire in a church that is part of the world's heritage and he wants to give us lessons for our country?" he said, quoted by the Globo news website. 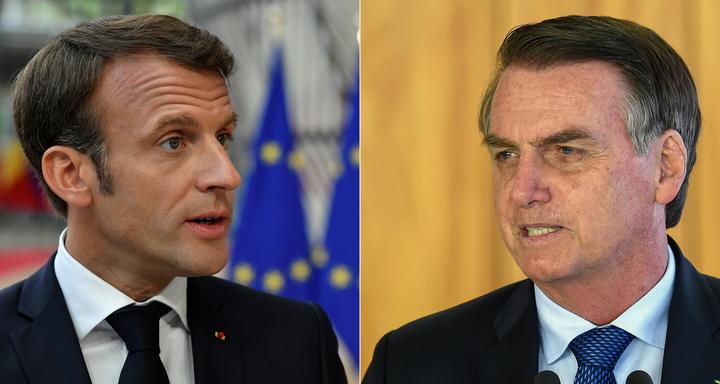 Does Brazil need help to fight the fires?

As the largest rainforest in the world, the Amazon is a vital carbon store that slows down the pace of global warming. It spans a number of countries, but the majority of it falls within Brazil.

Wildfires often occur in the dry season in Brazil but satellite data published by Brazil's space agency show an increase of 80 percent this year.

BBC analysis has also found that the record number of fires being recorded coincides with a sharp drop in fines being handed out for environmental violations.

Mr Bolsonaro has previously said his government lacks the resources to fight the record number of fires in the Amazon region but his government is also being accused of slashing funding for environmental protection.

"The funding for Brazil's environment agency has gone down by 95% this year," Yadvinder Malhi, professor of Ecosystem Science at the University of Oxford, told the BBC's Today programme.

On Friday, President Bolsonaro authorised the military to help tackle the blazes.

Brazil says 44,000 soldiers have been deployed to combat the fires and environmental crimes in the Amazon, and military operations are under way in seven states as the result of requests for assistance from local governments.

What are people on the ground saying?

Jorgimar Alberto, from Roraima, one of the states most affected by the fires, has seen the burning of most of the land surrounding his wooden house.

It's a risky situation, we have lots of crops here and everything is burning, such as the cashew trees," he told the BBC.

"I even had to keep the animals [inside] so that they don't burn as well. Every year it is the same, these fires are disturbing the region a lot."

Environmental officials helped him extinguish the fires last week only for them to reignite, he said.

His wife could not stand staying in the house with the smell of burning and the threat getting ever closer, so she left.

Lumberyard owner Edson Oliveira from southern Amazonas said he did not believe the media coverage about the Amazon.

"In my opinion, the parts that are burning are the same that burn every year," he told the BBC.

Asked what he would like politicians to do for the Amazon, he said that he would like "economic alternatives for people here, to find a way we can make use of the natural wealth we have here".

"It's no use pointing the finger at what's wrong without bringing alternatives to people," he said.

What was pledged at the summit?

The $US22m was announced on Monday as the leaders of the G7 - Canada, France, Germany, Italy, Japan, the UK and the US - met in Biarritz, France.

Mr Macron said the funds would be made available immediately - primarily to pay for more firefighting planes - and that France would also "offer concrete support with military in the region".

Greenpeace France described the G7's response to the crisis as "inadequate given the urgency and magnitude of this environmental disaster".

Why is Bolsonaro so prickly about foreign aid?

He has long maintained that European countries are trying to gain access to Brazil's natural resources. He alleges that European interest in the welfare of the Amazon is a thin guise for attempts to gain a foothold in the region.

Asked by international journalists about environmental protection of the Amazon at a press briefing on 6 July, he said: "Brazil is like a virgin that every pervert from the outside lusts for."