A white man who shot and killed an unarmed black man over a parking dispute in the US state of Florida has been found guilty of manslaughter. 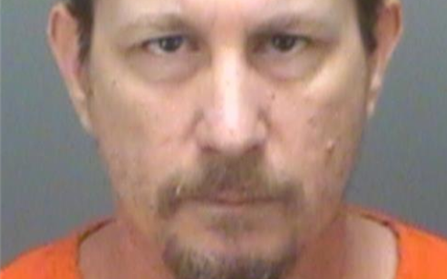 Drejka had cited the state's "stand your ground" law, which has provided a self-defence case for those threatened by deadly force or imminent danger.

Drejka faces up to 30 years in prison and will be sentenced in October.

"It's been well over a year since we've been dealing with this matter and I can safely say my family can rest now," Markeis McGlockton's father, Michael McGlockton, told reporters.

Drejka's lawyer, John Trevena, said his client would probably appeal against the verdict, which he called "a mystery".

The fatal shooting prompted protests and vigils around the state.

Why did the shooting take place?

The dispute began after Drejka confronted Mr McGlockton's girlfriend, Brittany Jacobs, because she had parked in a disabled parking space with two of her children.

As their argument escalated, Markeis McGlockton, 28, rushed from a nearby shop and pushed Drejka to the ground.

Drejka - who had a concealed weapons licence - then pulled out a gun and shot Mr McGlockton.

CCTV footage shows Mr McGlockton rushing back inside the shop while clutching his chest. He was taken to hospital in the city of Clearwater and pronounced dead.

Drejka claimed to have acted in self-defence, but police faced criticism for the initial decision not to charge him.

"If he was going to hit me that hard to begin with, a blind side from the get-go, what else should I expect?" he later said in a police interview.

Drejka also said that his "pet peeve" was illegal parking in disabled spaces, and he admitted to police that he had frequently taken photos of offending cars.

Court documents revealed he had been accused as an aggressor in four other road incidents between 2012 and 2018. In three of them, prosecutors alleged that he threatened people with a gun.

A six-member jury took about six hours to reach the verdict late on Friday.

Drejka's lawyers argued Mr McGlockton caused his own death by making Drejka fear for his life.

"The threat was real," Mr Trevena told the court. "He had the right to stand his ground and no duty to retreat".

But prosecutors said CCTV footage showed that Mr McGlockton stepped away after the weapon was pointed at him.

Assistant State Attorney Scott Rosenwasser said it was a "cut and dry" murder by a self-proclaimed "parking lot vigilante".

"You know what Markeis McGlockton is guilty of?" Mr Rosenwasser asked the court. "He is guilty of loving and trying to protect his family and he died because of it."

During the proceedings, jurors had asked for more clarity over the state's self-defence law. Judge Joseph Bulone told them that all he could do was reread it to them.

What is stand your ground and why is it controversial?

Introduced in Florida in 2005, the law establishes the right for people to defend themselves, with lethal force if necessary, if they believe they are under the threat of bodily harm or death.

It overturns previous legal principles that dictate a person should retreat before using any force to defend themselves. But the law also states that legal protections cannot be given if the person instigated the altercation.

All but two of the 50 states have some form of stand-your-ground law. Critics argue it has led to more shootings and has made it harder for some criminals to be prosecuted.

Opponents also believe that a racial disparity exists in the law's enforcement.

The law came under intense scrutiny following the fatal shooting of an unarmed teenager in 2012.

George Zimmerman, a neighbourhood watchman, shot Trayvon Martin, who was walking back from a shop in the city of Sanford. Florida police cited the law after they released Mr Zimmerman without charge on the night of the shooting.

More than 480,000 people signed a petition calling for him to be prosecuted. He eventually stood trial but was found not guilty.