Brazil's president has ordered the armed forces to help fight a record number of forest fires in the Amazon. 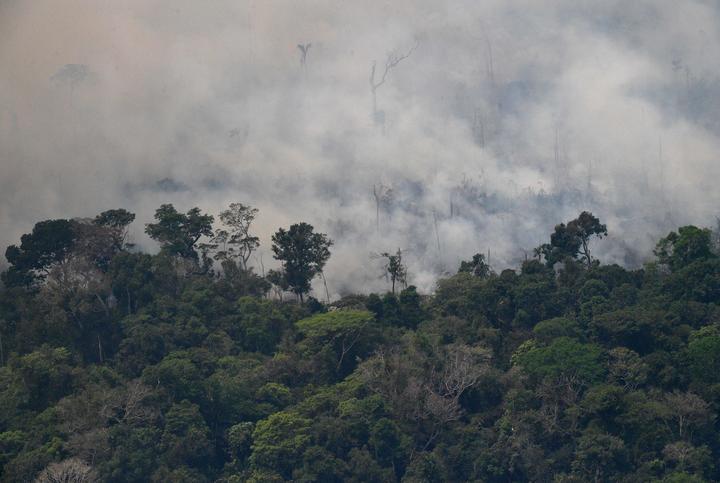 Aerial picture showing smoke from a 2km stretch of fire billowing from the Amazon rainforest, about 65km from Porto Velho, in northern Brazil, on 23 August, 2019. Photo: Carl DE SOUZA / AFP

A decree issued by President Jair Bolsonaro authorises the deployment of soldiers in nature reserves, indigenous lands and border areas in the region.

However, he has so far insisted the fires in a region often called 'the Lungs of the World' are an internal matter for Brazil, and for its affected neighbours.

The announcement comes after intense pressure and building criticism of Brazil's handling of the crisis from European leaders.

The issue is to be discussed at a summit of G7 leaders in France this weekend.

The French president Emmanuel Macron said the crisis must top the agenda.

He said he would not ratify the EU-Mercosur pact while President Jair Bolsonaro maintained his current, denialist stance on climate change.

Ireland also said it would not ratify the huge trade deal with South American nations unless Brazil did more to tackle the blazes.

Finland is currently president of the Council of the EU - a role which is rotated among member states every six months.

A senior director at the UN Convention on Climate Change, Martin Frick, said the fires could have major repercussions for the rest of the planet.

"Big wildfires are a disaster for the planet. They're releasing thousands and millions of tonnes of CO2 into the atmosphere.

"But also in the short term, they're putting big amounts of black carbon smoke into the atmosphere - a big health hazard for people who live in the vicinity, but also a strong driver of climate change."

Environmental groups have called for protests in cities across Brazil on Friday to demand action to combat the fires.

Hundreds of protesters also gathered outside the Brazilian embassies around the world, including in London, Berlin, Mumbai, Paris and Buenos Aires. 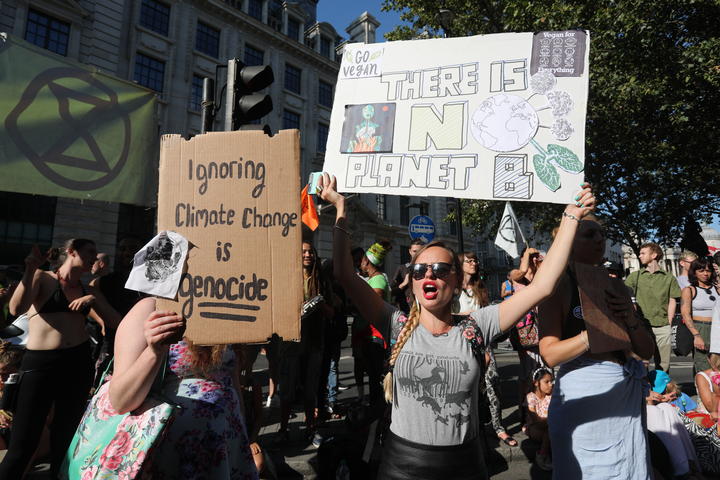 Protesters call for Brazil to protect the Amazon from fire and deforestation, outside the Brazilian embassy in central London on 23 August, 2019. Photo: AFP or licensors

"We can't stand around waiting for the sky to turn black all the way here in London too," protester Laura Villares House, 33, told BBC Brasil.

Brazilians living in New Zealand are welcoming the intervention by foreign governments.

Fabiola Stevenson is organising a demonstration outside her country's embassy in Wellington early next month.

"We want international agencies to help - Amazon is not just Brazilian anymore, it's the world's forest that sucks up at least a fourth of the 2.5 billion of carbon a year, that are emitted. So it's everybody's problem now."

Ms Stevenson is also calling on multinational companies to halt all plans to destroy the rainforest to make way for crops and mining.

Why does the Amazon matter?

The largest rainforest in the world, the Amazon is a vital carbon store that slows down the pace of global warming.

It is known as the "lungs of the world" and is home to about three million species of plants and animals, and one million indigenous people.

UN Secretary-General Antonio Guterres tweeted on Thursday: "In the midst of the global climate crisis, we cannot afford more damage to a major source of oxygen and biodiversity. The Amazon must be protected."

How bad are the fires and who is responsible for them?

Satellite data published by the National Institute for Space Research (Inpe) has shown an increase of 85 percent this year in fires across Brazil, most of them in the Amazon region.

Mr Bolsonaro has brushed off the latest data, arguing that it was the season of the "queimada", when farmers burn land to clear it before planting.

However, Inpe has noted that the number of fires is not in line with those normally reported during the dry season.

Wildfires often occur in the dry season in Brazil, but they are also deliberately started in efforts to illegally deforest land for cattle ranching.

Conservationists say Mr Bolsonaro has encouraged loggers and farmers to clear the land.

During his campaign, he pledged to limit fines for damaging the rainforest and to weaken the influence of the environmental agency.

Mr Bolsonaro has suggested that non-governmental organisations (NGOs) started the fires, but admitted he had no evidence for this claim. In comments on Thursday, he acknowledged that farmers might be involved in setting fires in the region, according to Reuters news agency.

US space agency Nasa, meanwhile, has said that overall fire activity across the Amazon basin this year has been close to the average compared to the past 15 years.