Brazilian President Jair Bolsonaro has accused his own country's national space institute of lying about the scale of deforestation in the Amazon. 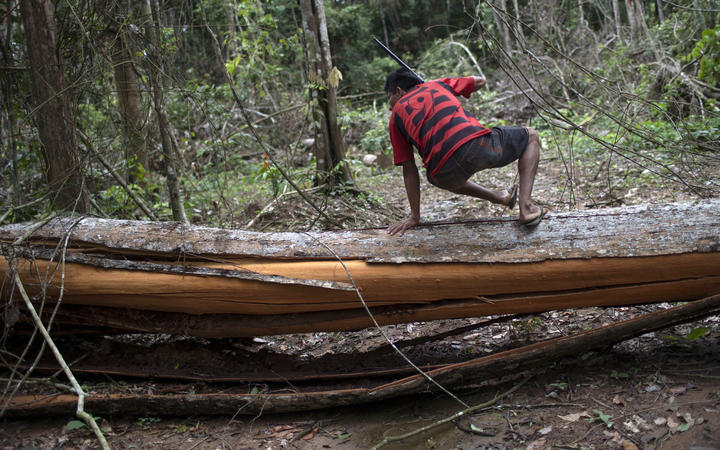 He said the institute was smearing Brazil's reputation abroad by publishing data showing a dramatic increase in deforestation there.

The far-right president said he wanted to meet with the head of the agency to discuss the issue.

Mr Bolsonaro's comments came a day after preliminary satellite data released by the institute showed more than 1000 square kilometres of rainforest had been cleared in the first 15 days of July - an increase of 68 percent from the entire month of July 2018.

Speaking in a meeting with foreign journalists, Mr Bolsonaro said the data "doesn't relate to the reality".

Scientists say the Amazon has suffered losses at an accelerated rate since Mr Bolsonaro took office in January, with policies that favour development over conservation.

As the largest rainforest in the world, the Amazon is a vital carbon store that slows down the pace of global warming.

Official figures suggest the biggest reason to fell trees there is to create new pastures for cattle.

Over the past decade, previous governments had managed to reduce deforestation with concerted action by federal agencies and a system of fines.

But Mr Bolsonaro and his ministers have criticised the penalties and overseen a dramatic fall in confiscations of timber and convictions for environmental crimes.

Several scientific institutions, including the Brazilian Academy of Sciences, have defended The National Space Research Institute and the accuracy of its data.

Mr Bolsonaro also denied the existence of hunger in Brazil. He said there are no "people on the streets with skeletal physiques as seen in other countries", Reuters reports.

According to data from the UN's Food and Agriculture Organization, about 5.2 million people suffered from hunger in Brazil in 2017.