Australia will send a warship, surveillance aircraft and Defence Force personnel to the Persian Gulf to join an international effort to combat Iran's actions in the Strait of Hormuz. 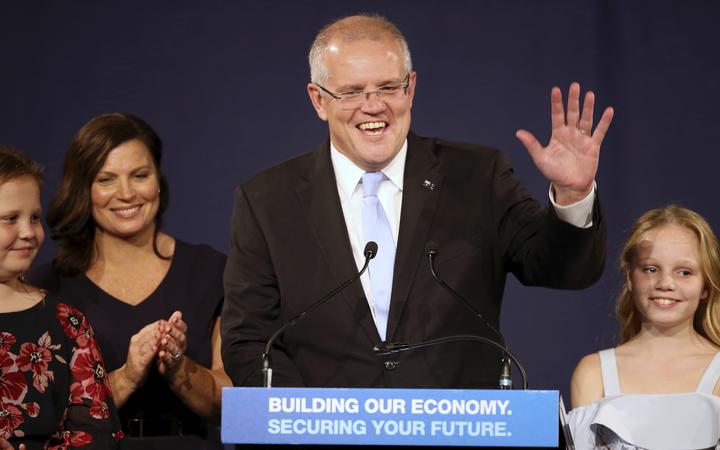 Prime Minister Scott Morrison announced the move this morning, saying it was in support of US-led efforts to keep the Strait of Hormuz open for shipping.

Mr Morrison said recent disruption to shipping in the region was a threat to Australia's national interests.

Australia has been considering joining the US-led military effort, which also includes the United Kingdom and Bahrain, for weeks.

Tension in the region increased when the UK seized an Iranian oil tanker off Gibraltar, prompting Iran to retaliate by seizing a British tanker in the Persian Gulf.

"Fifteen to 16 per cent of crude oil and 25 to 30 per cent of refined oil destined for Australia transits through the Strait of Hormuz," Mr Morrison said.

"So it is a potential threat to our economy."

The US and Iran have become increasingly combative since US President Donald Trump pulled out of an international agreement which curbed the Islamic Republic's nuclear program in return for an easing of economic sanctions on Iran.

Iran retaliated by resuming uranium enrichment, seen in the West as a potential conduit to it developing a nuclear bomb.

But it faces severe economic damage under intensified US sanctions designed to strangle its vital oil trade.

After several attacks in May and June on oil tankers - which Washington blamed on Tehran - Mr Trump began trying to forge a military coalition to secure Gulf waters.

America's European allies have been loath to join the effort, for fear of provoking open conflict.

Mr Morrison made the announcement that Australia would join up at Parliament House alongside Defence Minister Linda Reynolds and Defence Chief Angus Campbell.

"Australia's core interest in this mission is de-escalation. It is all about de-escalating rising tensions in the Gulf," Senator Reynolds said.

Mr Morrison denied Australia risked being tied to another US-led military effort in the Middle East.

"The United States is pulling this together, but it's also the UK's view that this provides the opportunity for others to be involved in a multi-national engagement," he said.

Mr Morrison spoke with British Prime Minister Boris Johnson and US Secretary of State Mike Pompeo early on Wednesday to inform them of Australia's involvement.

There will be about 200 Australians involved in the deployment, with 177 Defence personnel on the warship and 10 on the surveillance aircraft.

"Australia has a particular interest in freedom of navigation - we're an island trading nation," he told reporters in Sydney, noting the Government had offered Labor a briefing on the matter.

"A large part of our economy is based on trade, and the vast bulk of that trade goes by sea.

"This is a piece of international architecture which is as essential to our national interests as any."

Mr Morrison said it was yet to be determined how many Australians would be sent to the Middle East headquarters of the military effort.

He heads to Vietnam tomorrow before travelling to France to attend a G7 meeting, where he said he would discuss Australia's involvement with world leaders.

"The international environment is very difficult. The global economy is facing rising headwinds, as I've noted before - rising geopolitical tensions and protectionism is weighing heavily on global confidence and growth," Mr Morrison said.

"We will work with our partners. We will play our part in shaping a better future for Australia, and Australians, as well as in the region and across the world."