The US Department of Justice has made a last-minute request to the authorities in Gibraltar to halt the release of a seized Iranian supertanker. 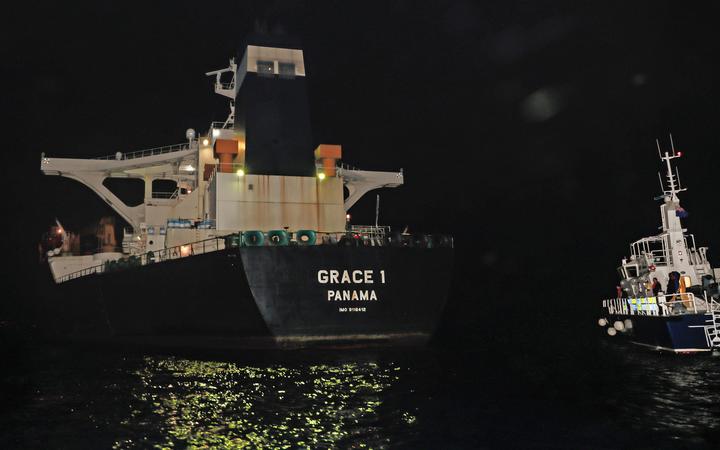 Grace 1, carrying Iranian oil, was stopped by Royal Marines on 4 July, triggering a standoff with Tehran.

The vessel was due to be released, after Gibraltar's attorney general indicated there would be no further order for its detention.

But the US request will be considered, with a court hearing set for 15:00 BST.

Gibraltar said the US application is based on a "number of allegations which are now being considered".

The UK Foreign Office said it was unable to comment on the US request.

BBC World affairs correspondent Jonathan Marcus said the UK had been hoping the release of Grace 1 would clear the way for the eventual freeing by the Iranians of the Stena Impero, a British-flagged vessel they seized in the Gulf.

A spokesman for Gibraltar's government also confirmed that police proceedings against all four members of the crew, including the captain - an Indian national - had ended.

The crew's legal team told the BBC that police had said this was due to actions by the Iranian government, and that it was no longer in the public interest to proceed.

The tanker was first seized after the government of Gibraltar suggested it was heading for Syria, in breach of EU sanctions.

About 30 marines were flown from the UK to Gibraltar to help police detain the tanker and its cargo, at the request of the Gibraltar government.

The initial seizure of the tanker sparked a diplomatic crisis between the UK and Iran, which has escalated over recent weeks.

On 19 July, British-flagged and Swedish-owned oil tanker Stena Impero was seized by Iran's Revolutionary Guard in the Gulf.

Last week, the UK announced it would join a US-led taskforce to protect merchant ships travelling through the key shipping route in the Strait of Hormuz.

Tensions between Iran and the West can be traced to the resurgence of another crisis - that over Iran's nuclear programme.

Last year, Washington withdrew from a 2015 deal to limit the Iran's nuclear activities, amid suspicion that Tehran was still trying to develop nuclear weapons. Something Iran has always denied.

Since then, US-Iran tensions have grown after Washington imposed - and latterly tightened - its sanctions against the country.

The UK and other European countries have said they remain committed to the deal.