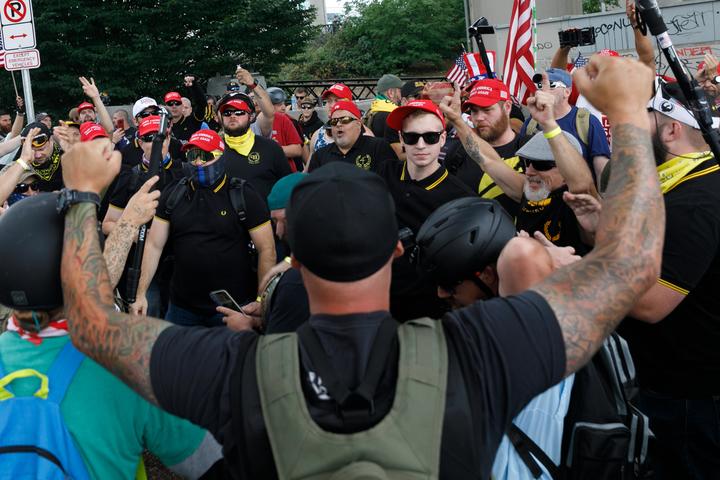 Hundreds of members of far-right groups face some antifa protesters at a rally at a waterfront park in Portland. Photo: AFP

A huge police operation kept the right-wing rally separated from supporters of the antifa (anti-fascist) movement.

Small clashes that did take place occurred as the rival factions moved away after the rally.

Rally organisers were calling for antifa to be declared a domestic terror organisation.

Portland, one of the most liberal cities in the US, is regarded as an antifa stronghold.

How did events unfold?

Police said they seized weapons including metal poles and shields from both sets of protesters.

At least six people suffered minor injuries and one person was taken to hospital.

At the height of the demonstrations there were about 1200 people on the streets of the city centre, she told a news conference.

Who attended the rally?

The rally has mainly been promoted by Joe Biggs, a member of the far-right Proud Boys group and former employee of Alex Jones' Infowars.

Proud Boys - which The Southern Poverty Law Center, a major US civil rights organisation, has classified as a hate group - has been involved in previous far-right rallies, and violent street clashes, in Portland.

Members of the local Rose City Antifa group are mounting a counter-demonstration in the city.

A statement on its website accuses far-right groups of planning "to bring their branded political violence to our streets" and encourages people "to defend Portland against far-right attack".

As well as Proud Boys, a number of other far-right groups have said they will be there - for example the American Guard, which the Anti-Defamation League has called "hardcore white supremacist", and the militia group, Three Percenters.

It follows two years of increasingly violent rallies in Portland, many of which were organised by Joey Gibson, the leader of far-right group Patriot Prayer. Mr Gibson is currently facing criminal charges connected to a right-wing riot outside a bar in May.

But organisers claim this particular rally is a response to an incident said to have taken place at the last far-right rally held in the city, in June. Then, right-wing writer Andy Ngo had milkshakes thrown at him and was punched by counter-protesters.

President Donald Trump has said the Portland situation is being closely watched by his administration, and indicated that naming antifa "an organisation of terror" was being considered.

Mr Trump has previously mentioned white supremacists, as well as antifa as being a major issue.