A student is keeping the heat on Auckland University after complaints of a growing white supremacy movement on campus were described as "utter nonsense". 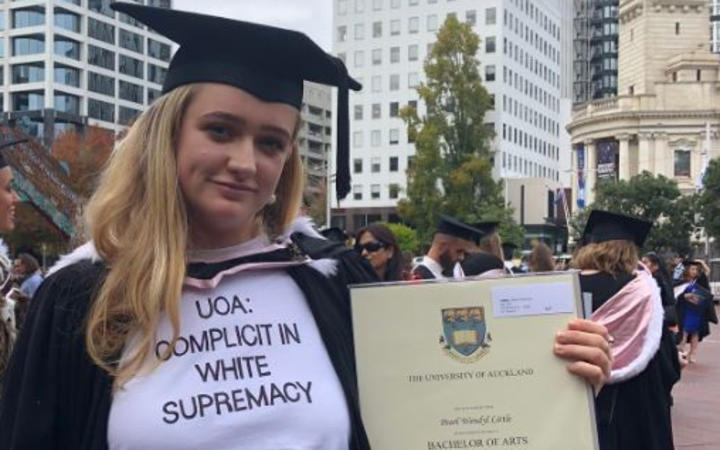 Earlier this month, students told RNZ disturbing behaviour had been going on for years but had ramped up in the wake of the Christchurch terror attack.

University vice chancellor Stuart McCutcheondismissed the complaints saying there was no evidence of an increasing problem.

Hundreds of Auckland University students graduated yesterday, although the traditional processions were cancelled because of security concerns in the wake of last month's mosque attacks.

Pearl Little decided to wear something a little different for her graduation ceremony when she walked across a stage in front of staff, students and parents.

"I decided to wear t-shirt to my graduation that said 'UoA: complicit in white supremacy'."

It was her protest at the university's response to the recent complaints of white supremacy on campus.

"I ... didn't want this to fade away and I wanted to still remind people to keep thinking about the responsibility the university has to protect its students, and to combat this sort of white supremacist, alt-right rhetoric that's been slowly growing in the university."

She said the graduation ceremony was a good place to remind the university of its zero tolerance policy on racism and discrimination.

A number of Auckland University students have told RNZ they do not feel safe on campus because of an increasing number of people with extreme white supremacist views.

They have described threats to workspaces, physical intimidation and graffiti on campus.

One of those students, who asked not to be named, is delighted with Ms Little's protest.

"You know, there's lots of people who don't know each other who are being affected by these things. So it feels really validating to see someone say 'hey this is a big issue and I'm not willing to be silenced."

The university is investigating complaints about the behaviour of two current students - one who's described himself as a Nazi.

The New Zealand Union of Students' Association president James Ranstead said the response of the university had not been appropriate.

A spokesperson for the university said it had no comment on Ms Little's printed shirt as it was her right to share her opinion.