A woman's body has been found in a building in central Sydney after a major police operation shut down part of the CBD. 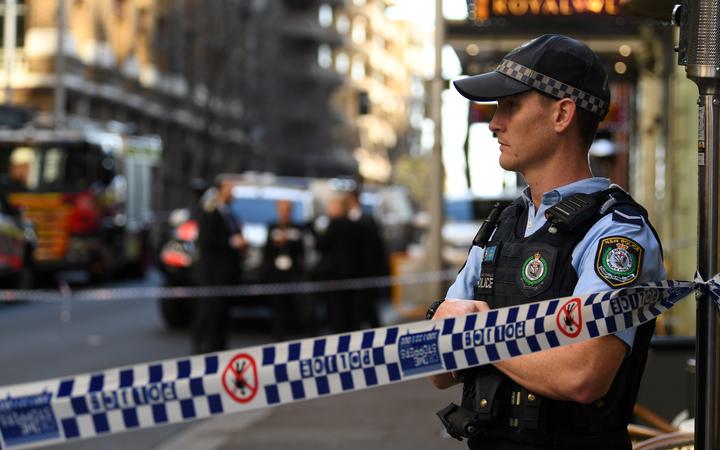 A policeman stands by a roped off crime scene after a man stabbed a woman and attempted to stab others in central Sydney. Photo: AFP

Police investigating the death say it is connected with an earlier knife attack and pursuit in the city.

A police source told the ABC the dead woman appeared to have suffered stab wounds.

Police and ambulance officers are at the scene.

It comes after a man armed with a large knife was arrested after allegedly stabbing a woman, injuring her, about 2pm (local time) today, sparking a major police operation. The injured woman was taken hospital in a stable condition.

Police and NSW Ambulance paramedics found the injured woman inside the Hotel CBD, on the corner of King and Clarence streets.

Video taken at the scene shows passers-by using chairs, a crowbar and a milk crate to apprehend the alleged offender, before he was arrested by authorities.

One witness told the ABC he was walking towards Wynyard Park when a man came running around the corner "with a long knife".

In what police described as "heroic" actions, passers-by and firefighters used chairs, a crowbar and a milk crate to apprehend the man, before he was arrested by authorities.

Video shows the man jumping onto a car roof in the middle of the street before being restrained by members of the public.

"[He was] about three or four metres away from me, and then came about five or six other men chasing him," a witness said.

"They were armed with crowbars and one man had an axe and another man … I think had a firefighting implement.

"My immediate impression was that it was a scene from a crime show being shot, but then that quickly turned out not to be the case and the man ran down the road towards the cafe where patrons there must have tripped him up and they then put a milk crate over his head."

When the man fell he dropped a knife into the gutter.

"There was a fair bit of force being applied to him at the time," the witness said.

NSW Police Superintendent Gavin Wood said the man had tried to stab the woman before trying to stab others.

"There has been, again, subsequent to that stabbing a number of attempted stabbings by the same offender and bearing in mind we have multiple crime scenes, we are in the infancy stage of this investigation," he said.

He said the man had been arrested and "the threat has been negated".

"The male offender was on his own and there was no other person complicit at this stage."

Police Commissioner Michael Fuller said a thumb drive linked to the arrested man had information on mass deaths around the world, namely from North America and New Zealand, but police were not treating the attack as terrorism.

The ABC understands the man escaped from a mental health facility and police confirmed he had a history of mental health problems.

The injured woman, a 41-year-old who police said was stabbed in the back in a "random attack", remains in a stable condition in Sydney's St Vincent's Hospital.

'These people are heroes'

Superintendent Wood lauded the actions of the bystanders who restrained the alleged offender and called them "heroes".

"They were brave and I can only use that word seriously - they were significantly brave people," he said.

"To approach a person with a mindset of obviously what this person did, with clear evidence of a stabbing previously, these people are heroes."

The man has been taken to Day Street Police Station.

A number of crime scenes have been established and a number of road closures are in place.