An attack by a gunman at a Norwegian mosque will be investigated as a possible act of terrorism, police say 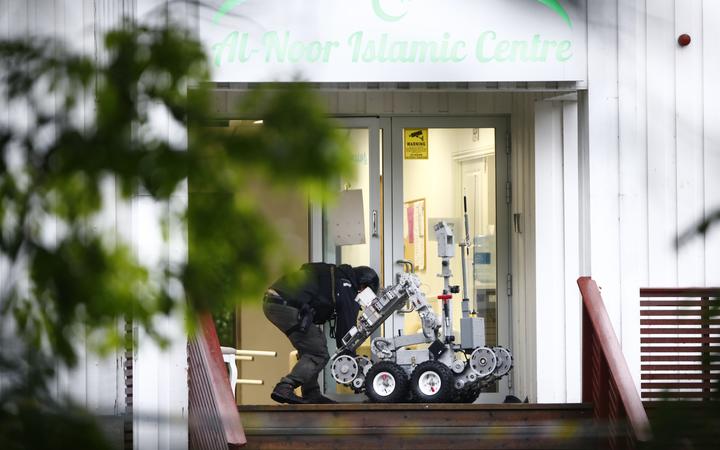 A police officer and a robot in front of the Al-Noor Islamic Centre where a gunman opened fire. Photo: AFP

"We're investigating this as an attempt at carrying out an act of terrorism," he said.

The suspect had been apprehended after Saturday's attack, in which shots were fired but no one was hit, with one of the people inside the mosque having overpowered him before police arrived.

Only three people were present in the mosque at the time of the attack, preparing for Sunday's celebration of the Eid-al-Adha festival, mosque spokesman Waheed Ahmed told Reuters on Saturday.

Mohammad Rafiq, a 65-year-old retired Pakistani Air Force officer, was the first of the three to approach the attacker, the mosque said.

"I suddenly heard shooting from outside," Rafiq told Reuters via an interpreter, adding that a man then entered the building with guns and pistols.

"He started to fire towards the two other men," Rafiq said, adding that he had then grabbed the attacker, holding him down and wrestling the weapons off the attacker.

His eye red and one hand swollen, Rafiq, who has lived in Norway for the past two and a half years, said he was still recovering from the attack.

The attacker, who has not been named, was also suspected of killing one of his own family members, a young woman who was found dead at his home, police said earlier.

The mosque had implemented extra security measures this year after the killing of 51 people at two Christchurch mosques in March.

Norwegian Prime Minister Erna Solberg said police had ramped up security on Sunday as thousands of Muslims gathered at mosques for the Eid celebration.

While the government continuously tries to combat hate speech, more must still be done, she added.

"We are trying to combat this, but it's a challenge. I think it's a world-wide challenge in a sense," Solberg said.

In 2011, anti-Muslim neo-Nazi Anders Behring Breivik massacred 77 people in Norway's worst peacetime atrocity, the majority of them teenagers at a youth camp.