Kyrgyzstan's security forces have arrested former President Almazbek Atambayev after a botched raid on his property overnight resulted in the death of one officer. 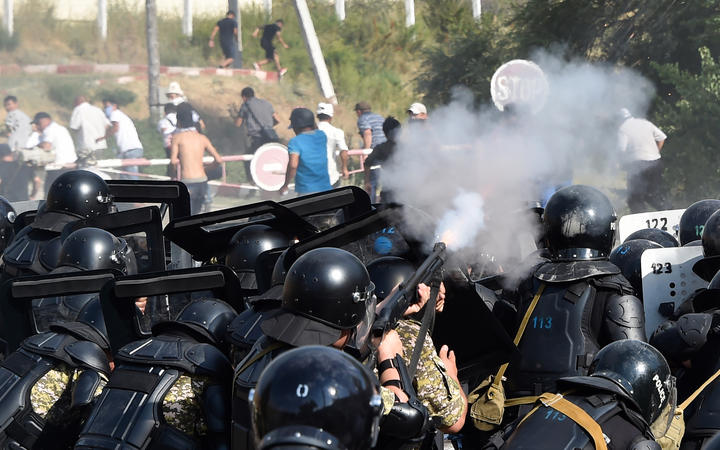 Kyrgyz special forces fire weapons as they block a street during clashes between supporters of Kyrgyzstan's former president and law enforcement, in the village of Koy-Tash. Photo: Photo / AFP

Mr Atambayev reportedly surrendered and was taken to the capital, Bishkek.

It followed a standoff in which his supporters took six officers captive.

Current President Sooronbai Jeenbekov said Mr Atambayev, who was initially wanted for questioning as a witness, had committed a "grave crime".

The former leader had repeatedly refused police summonses to testify as a witness about alleged corruption and abuse of office.

Special forces officers attempted to raid his house yesterday, but his supporters took up arms in his defence. The six soldiers they captured were later released.

Shortly afterwards, gunfire and stun grenades were reported at the home in a second raid on the property, on the outskirts of the capital.

"Yesterday we were summoning him as a witness, now we will summon him over a grave crime," he told a special parliamentary session on Thursday.

A police statement said Mr Atambayev - who ruled Kyrgyzstan from 2011 to 2017 - "will be delivered to the relevant authorities for further investigative measures".

Special forces used an armoured vehicle to break through the gates of the compound in Koi Tash village outside the capital, and soldiers blocked roads leading to Mr Atambayev's residence, local media reported.

Reports from local journalists at the scene said Mr Atambayev had surrendered to officers. Two aides were thought to be with him.

Local news site 24.kg reported he was flown by helicopter to avoid supporters, who were blocking the roads.

Politician Irina Karamushkina, an ally of Mr Atambayev's, told AFP his supporters were "ready to defend the former president to the end".

The former president had planned a rally today, but cancelled it and called his supporters back to defend his residence.

According to Kyrgyzstan's national security committee (GKNB), special forces armed "only with rubber bullets" were undertaking a "special operation to detain" the former president.

As the troops moved in yesterday, the GKNB said, Mr Atambayev's supporters fired back with live ammunition.

But Mr Atambayev took responsibility for the shooting, saying only he had a gun.

One officer was killed, while 80 people were injured and 53 hospitalised.

"A special forces officer was delivered [to hospital] in an extremely serious condition with a gunshot wound. Despite resuscitation attempts, he died," a health ministry statement said.

The head of the State Committee for National Security says at least 19 members of the security forces were injured, with six in a serious condition, 24.kg reports.

As night fell, roads leading to the compound were barricaded by Mr Atambayev's supporters while security forces regrouped nearby.

Witness Mirbek Aitikeyev, who posted footage of the raid on Facebook, told AFP news agency that some of those protecting Mr Atambayev had seized weapons from the special forces, who "retreated under the onslaught of the crowd".