Cyclist Egan Bernal, the first Latin American to win the Tour de France, got a hero's welcome from thousands of fans in his hometown of Zipaquira, Colombia. 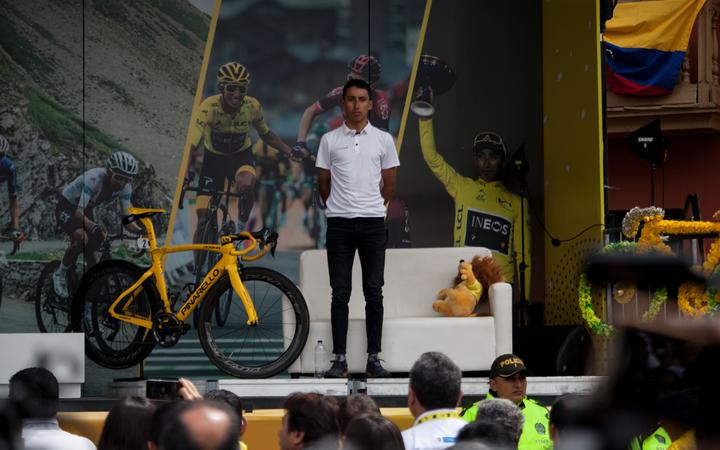 He promised a cheering crowd in the main square of this small Andean city that he would pursue further triumphs.

"I want to have my feet on the ground, to continue to work as I have been until now, to enjoy the bike, and if some day we can win another Tour de France, we'll try for a third. If we win the third, then a fourth and a fifth," Mr Bernal said.

"This is like a drug, you win one and you want more and more," said the climbing phenomenon, who gave Team Ineos - formerly Team Sky - their seventh title in the last eight editions.

"I want people to feel this triumph as their own."

Mr Bernal was crowned the Tour winner in July after retaining the overall leader's yellow jersey during the 21st and final stage, beating teammate and defending champion Geraint Thomas of Britain by one minute 11 seconds.

Mr Bernal started his training as a cyclist at 8 years old. His former coach still trains young riders, who he has said idolize Mr Bernal.

"He's a superhero for many," said mechanical engineer Jairo Sierra, 43, who drove from Bogota, the nearby capital, to attend the celebration, where attendees chanted "Champion Egan, Champion!"

Waving a cyclist figurine that she fashioned out of yarn, 35-year-old Andrea Malaver said Mr Bernal had brought joy to many of her fellow citizens.

"He's an inspiration for all Colombians," she said.

Colombian riders, accustomed to the thin air and steep slopes of the Andes, have a long, proud tradition of being competitive on the Tour.

Rigoberto Uran and Nairo Quintana also rode in this year's race. Quintana, a Giro d'Italia and Vuelta a Espana champion, finished runner-up in the Tour in 2013 and 2015.

On stage, the cyclist echoed the hopes of many in the crowd that he will enjoy a long career.

"There'll be Egan for a while."