A giant sand dune is being built on England's east coast to save 400 homes from storm surges, in Britain's first attempt to use "sandscaping" to stave off rising seas and prepare for a changing climate, engineers said on Tuesday. 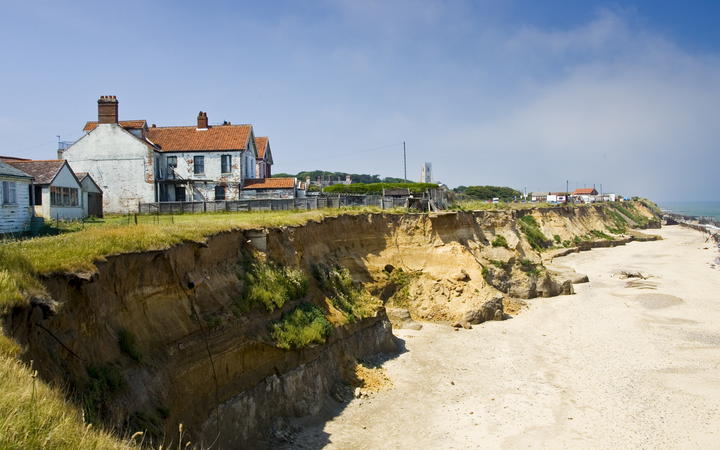 An eroded shoreline at Happisburgh, Norfolk, in the United Kingdom. Photo: AFP

The novel project, set to finish this month, will only buy north Norfolk residents about 20 to 30 years before erosion and likely relocation, according to Jaap Flikweert of Royal HaskoningDHV, the Dutch engineering company that designed the scheme.

"This coast will continue to erode ... these communities will at some point have to move back inland," Mr Flikweert said.

"This project is giving them time to adapt to that reality of coastal change."

With climate change, the world is becoming warmer and wetter, with more frequent extreme weather events, such as floods, storms and heatwaves, according to scientists.

Britain recorded its highest-ever temperature of 38.7 Celsius in July, while downpours last week led to flash floods, with 50mm of rain falling in just one hour, the national weather service said.

Police evacuated more than 6000 people from Whaley Bridge in central England last week as a military helicopter dropped bags of ballast on the edge of a dam which was badly damaged by heavy rain, and threatened to collapse and flood their homes.

If successful, the sand dune project near Bacton and Walcott beaches - costing about £18 million ($NZ34 million) - is set to inspire many more sandscape defences across Britain, said Flikweert.

It will also protect nearby Bacton Gas Terminal, which processes one-third of the nation's gas, said Mr Flikweert, whose firm has built similar dunes in the Netherlands.

"Not only was it essential to protect an important source of natural gas for the UK, but there are 2000 people in the nearby villages living with the threat of losing their homes and communities," he said.

About 1.8 million cubic metres of sand are being dredged and pumped from a nearby seabed and positioned on the shore by bulldozers, to create a solid protection and delay a diminishing coastline, according to North Norfolk District Council.

Britain's Department of the Environment, Farming and Rural Affairs (DEFRA), said it was committed to defending Britain's coastline where it is sustainable and affordable to do so, and to let the coast function naturally in areas where it is not.

DEFRA is providing £2.6b over six years to better protect 300,000 homes, it said in emailed comments.