Thousands of people are being evacuated from a town because part of a reservoir wall has collapsed in floods. 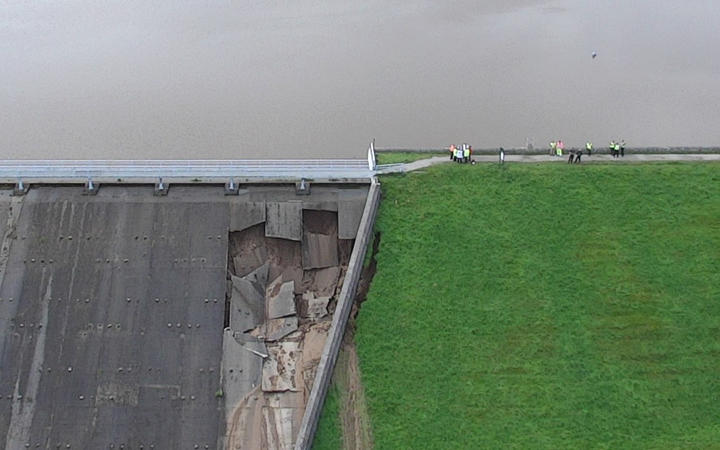 Damage to the Toddbrook Reservoir dam above the town of Whaley Bridge in northern England. Photo: AFP

Engineers are pumping water from the Toddbrook Reservoir amid fears it could burst and swamp Whaley Bridge in Derbyshire.

Police have told the town's 6500 residents to gather at a school, taking pets and medication with them.

A severe flood warning, which means a threat to life, has been issued for the River Goyt, below the reservoir.

Julie Sharman, chief operating officer of the Canal and River Trust, said: "The spillway for the dam has broken away.

"We are trying to lower the level of the water in the dam in order to reduce the risk of further erosion. There's a risk the dam could break."

Assistant Chief Constable Kem Mehmet from Derbyshire Police said they had plans for every scenario - including the dam, which holds back 1.3 million tonnes of water, collapsing.

Police told residents to gather at Chapel High School in the neighbouring town of Chapel-en-le-Frith and to take pets and medication with them as they "are not sure how long [it] will take".

They said evacuated residents should try to arrange their own accommodation as space was limited, but some local pubs and community halls had offered to take in evacuees.

There is a yellow weather warning for rain in place from the Met Office for the area until 20:00.

Trains between Hazel Grove and Buxton have been blocked because of the flooding, affecting Northern train services between Manchester Piccadilly and Buxton.

Ten pumps from fire services across the country are currently pumping out 7000 litres of water a minute in a bid to bring down the water level.

Jennifer, owner of the Goyt Inn, has been evacuated and is currently in the school.

She said: "I rang my partner and said, 'Bring the dog. We have to get out'.

"We've been told if we need accommodation, something will be organised, but at the moment, [the council] are waiting on structural reports from engineers.

"The dam is a mess. It really looks very unsafe and there's a lot of water in that reservoir."

Nigel Carson, who lives near the dam, said he felt some people in the area were not taking the problem "as seriously as they should".

"The whole of the village is vulnerable to this," he said.

"They're estimating that without it raining it will take two to three days to get the water level down two metres [but] it's raining heavily again now, and they need to get it down an awful lot more than two metres to make this safe."

Speaking to the BBC from the banks of the reservoir, Simon Perry, another Whaley Bridge resident, said the water levels were "right up to the limit".

"The rest of the village is a bit like a ghost town, it's pretty much deserted at the moment."

He said he has seen water spilling over the dam occasionally before, but added residents had been "fairly sanguine" and he had "not seen any panic".

Symon Trelfa, whose home is near the dam, said he is "worried I may have no home to return to".

He said: "There were rumours going around about the state of the dam yesterday so I decided to move into my sister's house in Chapel-en-le-Frith.

"There's gridlock on the local roads at the moment - people are abandoning vehicles."

She said: "Evacuation is absolutely necessary. I don't think they've got any choice. People are being advised not to take pictures. We are really very, very worried."

Councillor Martin Thomas, chair of Whaley Bridge town council, told the BBC the clay under the slabs of the slipway had been undermined when they were lost.

He said: "The situation is an unfortunate combination of circumstances.

"We've had a lot of wet weather recently, the ground is saturated, the reservoir was already full.

"Something we previously looked at as a benign leisure facility suddenly becomes a real mortal danger."

Ruth George, Labour MP for the area, said the town could be evacuated for "several days".

"It's hard to see how they can get the water in the reservoir down quicker than that," she added.

"The dam had some pretty significant structural repairs a few years ago.

"We were told after that it was safe but we have had an unprecedented amount of water coming down in the past few days.

"Nobody is looking at laying the blame. What we want to do is make sure the people in the town are safe."

The Canal and River Trust said it is working with "other agencies" and had engineers trying to get water out and sandbags are being put on the edge to shore it up and protect the rest of the concrete.

When asked if the dam might "actually break" a spokesman responded "there is a risk of that".

Julie Sharman, chief operating officer for the trust, said: "There's a severe weather warning this evening so we are working flat out to avoid any crisis."

She added they could not say how long the evacuation could last but they could be working on it "for days".