Japan's parliament opened a special session with its most diverse upper house yet, including more women, two severely disabled members and the first openly gay male lawmaker, all of whom were elected last month. 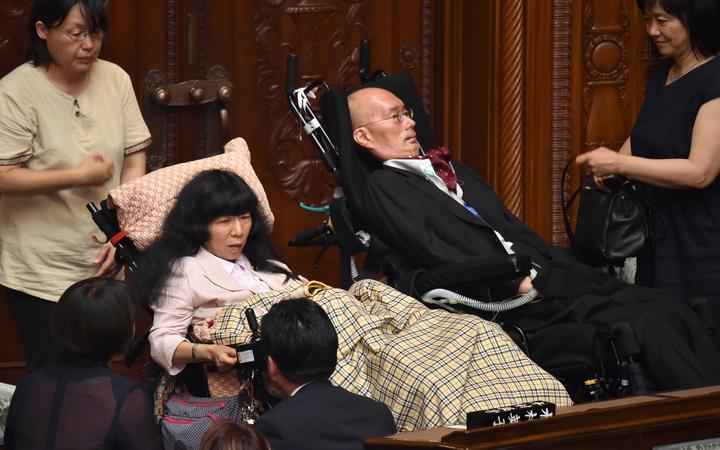 Japanese lawmakers Eiko Kimura and Yasuhiko Funago prepare to leave after the opening ceremony of a session at the Upper House plenary hall in Tokyo on 1 August, 2019. Photo: AFP / Kazuhiro Nogi

Newly crowned Emperor Naruhito read from a scroll in a ceremony attended by members of both houses.

Workers had removed chairs in the upper house to make room for the wheelchairs of the two disabled members, Eiko Kimura and Yasuhiko Funago, whose 21 July election wins point to changing attitudes in Japan, which has long kept disabled people hidden.

"I'm surprised to see that so many people have come," Mr Funago said through an aide who followed his eye movements as they scanned an array of Japanese letters in front of him. "I'll try to meet people's expectations."

Both Mr Funago, who has Amyotrophic Lateral Sclerosis (ALS), a progressive disease that leads to loss of muscle control, and Kimura, who has cerebral palsy, ran from a small opposition group, the Reiwa Shinsengumi.

Last month's elections also brought in 28 women, taking to 56 the total number of female members in the 245-seat upper house, or nearly 23 percent, up from 21 percent before. 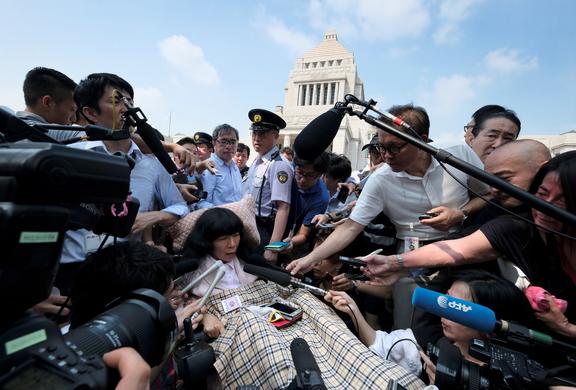 Japanese lawmaker Eiko Kimura is surrounded by the media upon her arrival at Parliament in Tokyo on 1 August, 2019. Photo: AFP / Kazuhiro Nogi

But in the more powerful lower house, women make up just 10 percent of the 465 members. In the two chambers taken together, women make up 14.5 percent of members, below a global average of 24.3 percent, data from the Inter-Parliamentary Union shows.

Also present at the opening was Taiga Ishikawa, the nation's first openly gay male MP. He won a seat with support from the Constitutional Democratic Party of Japan, the largest opposition party, which had made diversity a campaign slogan.

Apart from taking out seats, this week's renovations in the upper house involved removing a step and adding electric outlets for medical devices and computers, while a temporary ramp was built at the main entrance.

Disability experts say the elections of Ms Kimura and Mr Funago are welcome developments but greater changes are needed, even as Japan prepares to host the Paralympic Games next year after the Olympics.

People with physical or intellectual disabilities, as well as those with mental disorders, make up about 8 percent of Japan's population.