The Royal Canadian Air Force has joined the hunt for Bryer Schmegelsky and Kam McLeod, the two men wanted in connection with the murder of Australian man Lucas Fowler, and two others. 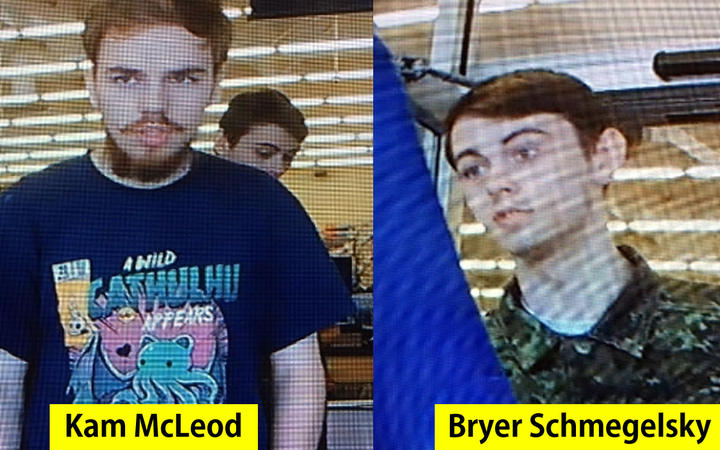 The triple-murder suspects have been on the run since 19 July, when their burning vehicle was discovered near the body of 64-year-old Leonard Dyck - just days after the bodies of Mr Fowler, 23, from Sydney and his American girlfriend, Chynna Deese, 24, were discovered on a highway in British Columbia.

The Royal Canadian Mounted Police (RCMP) has been scouring northern Manitoba, where a second burnt-out car was found on Tuesday.

A Royal Canadian Air Force CC-130H Hercules plane has since arrived in the area to help with the search, while RCMP officers check inside homes and buildings in the Gillam area, as well as an Indigenous reserve known as Fox Lake Cree Nation.

Gillam is surrounded by thousands of hectares of forest wilderness and has been described as "the end of the road".

"Over 100 empty homes have been thoroughly searched in the Town of Gillam," RCMP Manitoba said in a statement.

"Officers are also searching large abandoned buildings like the Keewatinohk Converter Station Camp, near Gillam, which has over 600 rooms."

Not only are our officers combing through kilometers of dense northern forest, they’re also challenged with searching & clearing large abandoned buildings like this one (with approx. 600 rooms) at the Keewatinohk Converter Station Camp, near Gillam. #rcmpmb @manitobahydro pic.twitter.com/IMkqMlKxx8

During an aerial search for the suspects about 200km north of Gillam on Sunday, authorities encountered a polar bear, cautioning that it was "just some of the wildlife that can be found in northern Manitoba".

A polar bear was spotted during the search for the suspects earlier today – about 200km north of Gillam. Just some of the wildlife that can be found in northern Manitoba. pic.twitter.com/Z1hbbtOCxw

According to police, there have been no new sightings of Mr Schmegelsky or Mr McLeod that would indicate they had fled the area.

However, investigators remained "open to the possibility", and were urging anyone who may have inadvertently provided assistance to the suspects to come forward.