Mexico's government will help Honduras create 20,000 jobs this year and support its coffee farmers as the two countries seek to curb migration to the United States, which has created tensions with US President Donald Trump. 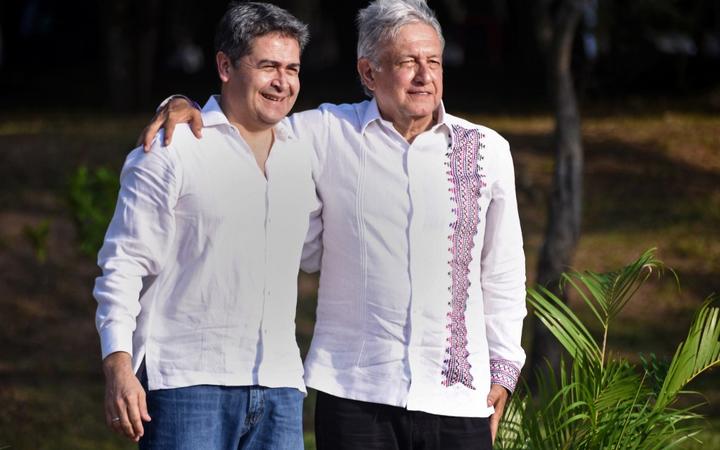 Mexican President Andres Manuel Lopez Obrador and his Honduran counterpart, Juan Orlando Hernandez, pledged to work together to lift prosperity in Central America, where poverty and violence have fueled an exodus of people north.

That migration has angered Mr Trump, who has made border security a priority, and issued economic threats against Mexico and Central America if more is not done to contain the flows.

Speaking after the Honduran and Mexican leaders met in the eastern state of Veracruz, Mexican Foreign Minister Marcelo Ebrard said Lopez Obrador had given instructions to help Honduras create 20,000 jobs between now and December.

He did not provide further details, but afterwards the two presidents offered more insights into their plans in speeches in the eastern city of Minatitlan.

Mr Hernandez said he was hoping a "great international coalition for mass job creation" in Central America could be forged, while Mr Lopez Obrador stressed that Mexico would support the region with funds and employment schemes.

In particular, Mr Lopez Obrador said, Mexico would assist Honduran coffee farmers, whose businesses have suffered this year from a drop in international prices.

"We'll help improve coffee production in whatever is needed, so you have no problem selling coffee."

Mr Lopez Obrador did not offer more details, but also said schemes he has championed in Mexico to create jobs via youth apprenticeships and tree planting would come to Honduras too.

There has been a surge this year in migrant apprehensions on the US southern border with Mexico. Most of the people caught trying to enter the United States illegally come from Guatemala, Honduras and El Salvador.

On Friday, Mr Trump said he had reached a deal with Guatemala to curb migration, though that plan was called into question on Saturday by the two politicians vying to become Guatemala's next president in an election next month.