Russian police have arrested more than 1000 people in Moscow in one of the biggest crackdowns of recent times against an increasingly defiant opposition challenging President Vladimir Putin's tight grip on power. 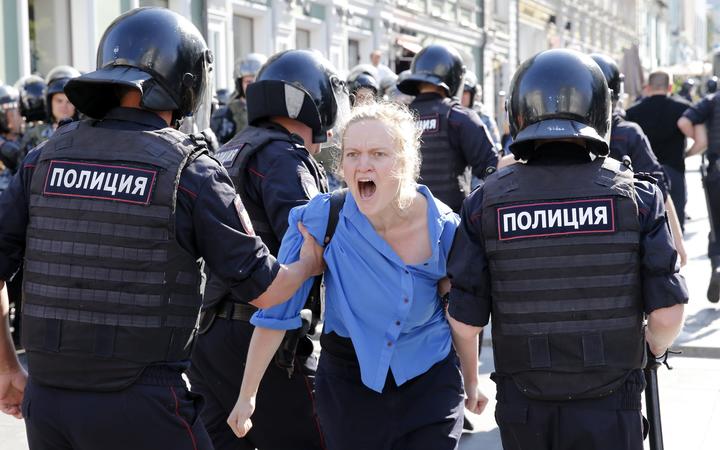 A protester is arrested during an unauthorised rally in Moscow. Photo: AFP

The detentions came before and after a protest to demand that opposition members be allowed to run in a local election. Authorities had declared it illegal and sought to block participation, but several thousand people turned up anyway in one of the longest and most determined protests of recent years.

Chants of "Russia without Putin" and "Putin resign" echoed through central Moscow as guardsmen clad in riot gear beat back protesters with batons and roughly detained people.

At least one woman and a man appeared to have suffered serious head wounds. 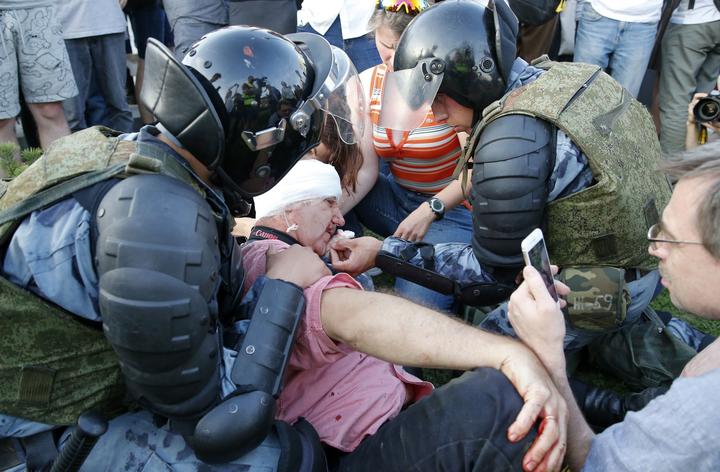 Soldiers help one of the injured protesters in Moscow. Photo: AFP

Though the authorities have the resources to break up demonstrations, Saturday's events showed how many activists and especially younger people are intent on pressing to open Russia's tightly-choreographed political system to competition.

Jailed opposition leader Alexei Navalny had called for Saturday's protest to persuade officials to allow opposition-minded candidates to run in an 8 September vote.

Authorities say they were barred because they failed to collect sufficient genuine signatures in their support.

The opposition has no seats in parliament and is starved of air time on state TV where many Russians still get their news. 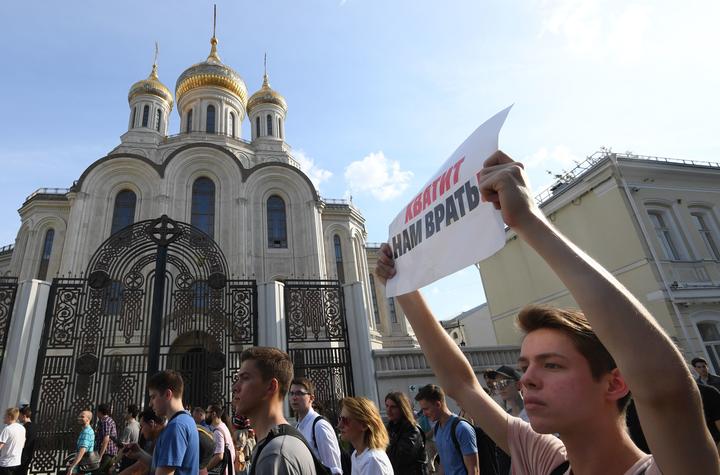 A protester carries a sign reading 'Stop lying to us' as the protest rally moves through the streets of Moscow. Photo: AFP

Opinion polls in the past have shown support for Mr Navalny, a lawyer and anti-corruption activist, only in the single digits. But backers note he won almost a third of the vote in a 2013 Moscow mayoral race and say his movement could build momentum in the Russian capital if allowed to compete fairly.

Though Mr Putin's approval rating is still high at well over 60 percent, it is lower than it used to be due to discontent over years of falling incomes. Last year, the 66-year-old former KGB intelligence officer won a landslide re-election and a new six-year term until 2024.

Burnishing his man of action image, Mr Putin spent Saturday diving to the bottom of the Gulf of Finland in a mini-submarine to pay tribute to a Soviet submarine that sunk there during World War II.

Arrested, sitting on a bench

OVD-Info, an independent monitoring group, said police had detained at least 835 people before or at the latest protest. As in past sweeps, many were only held for a matter of hours and later released.

Police put participation at more than 3500 people, of whom it said around 700 people were journalists and bloggers.

Some activists were arrested twice after being released and then returning to protest in a different place. Reuters witnesses said some of those detained appeared to be ordinary passersby in the wrong place at the wrong time.

One of those detained, Alexander Latyshev, 45, said he had came from the nearby Vladimir region to discuss business with an associate and been randomly detained. "I was just sitting on a bench (when they took me)," he told Reuters inside a police bus.

Before the protest, police detained activists to prevent them from attending the protest and blocked off some streets.

During the demonstration, they raided an office being used by Mr Navalny's supporters to live-stream the protest.

TV Rain, an independent station covering the protests, said its editor-in-chief had been called in for questioning.

Under Russian law, the location and timing of such protests needs to be agreed with authorities beforehand, something that was not done for Saturday's event.

Kremlin critic Mr Navalny was jailed for 30 days on Wednesday and other members of the opposition have had their homes searched. Ilya Yashin, a Navalny ally, said on Facebook on Saturday that police had searched his Moscow flat overnight before detaining him and driving him out of the Russian capital.

He called for another protest next Saturday. 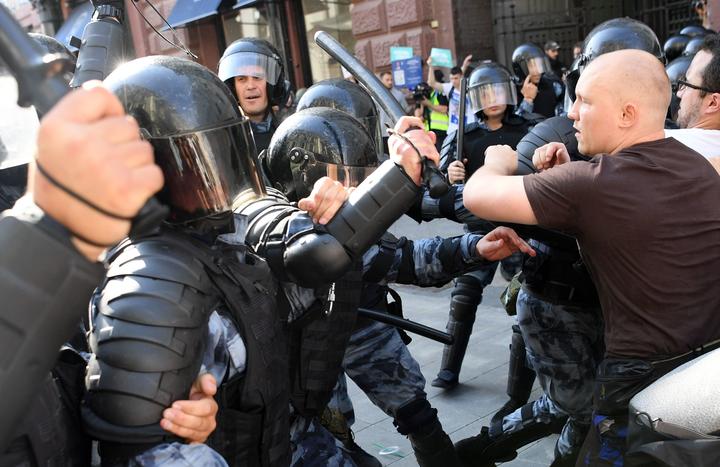 Kira Yarmysh, Mr Navalny's spokeswoman, said on Twitter she and another activist had been detained on Saturday morning. Other prominent activists, Dmitry Gudkov and Lyubov Sobol, were detained later.

Moscow Mayor Sergei Sobyanin, a Putin ally, had warned beforehand that authorities would act decisively against the risk of "serious provocations".

Russia's Investigative Committee, the police's investigative arm, has already opened a criminal investigation into an opposition rally in June which it said may have obstructed the work of Moscow's electoral commission.

An authorised protest in Moscow last weekend, also calling for the disbarred candidates to be registered, was attended by more than 20,000 people, according to the White Counter monitoring group.