A fugitive bear likened to a superhero for its daring escape over an electric pen in northern Italy is being hunted by forest rangers. 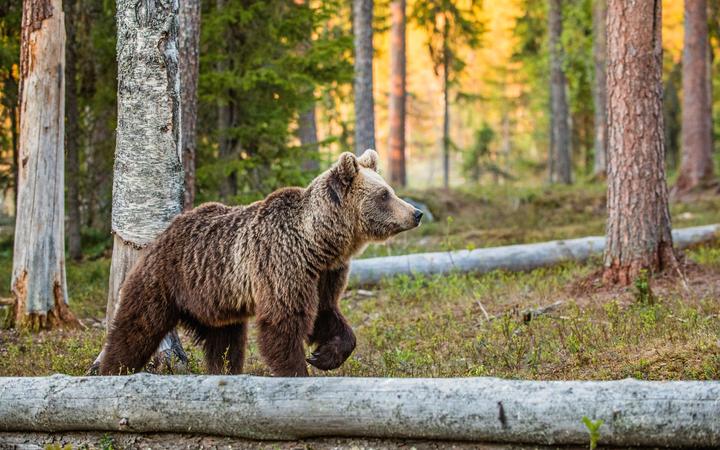 The brown bear, named M49, was snared in the Trentino region on Sunday.

Italian authorities had ordered the wild bear's capture after deeming it a danger to humans and farm animals.

But the animal fled just hours after it was caught, reportedly scaling three electric fences and a 4m high barrier.

Park rangers with sniffer dogs are hunting the animal, which is currently believed to be in the Marzola woods near Trento.

Trentino's governor Maurizio Fugatti gave forestry authorities permission to "shoot it down", saying the bear's escape over an electric fence "carrying 7,000 volts shows how dangerous it is".

But his orders provoked fury among animal rights activists and were rebuked by Italy's environment ministry.

"M49's escape from the enclosure cannot justify an action that would cause its death," said Environment Minister Sergio Costa.

Clarifying Mr Fugatti's orders, the regional forestry and wildlife department told the BBC that the bear would only be shot if it poses a danger to people.

"It's a decision that has to be taken soon because it's a matter of public safety," department spokesman Claudio Groff said.

"This bear has tried and probably will try again to enter homes. In this case a dangerous situation may arise."

WWF Italy, a global conservation organisation, questioned how the bear was able to climb the electrified fence, suggesting the structure was probably "not working properly, since bears do not fly".

Italy's League for the Abolition of Hunting (LAC) gave the bear credit for a getaway Italian media have compared to the 1963 WWII film, The Great Escape.

"Evidently, M49 is an escape genius… gifted with superpowers akin to a hero of Marvel Comics," it said.

Michela Vittoria Brambilla, president of the Italian Defence League for Animals, told M49 to "run and save yourself!"

Mr Groff said the animal's break-out was surprising as the electrified pen in which it was held had hosted other "problem bears" since 2007 without incident.

He said the "very brave and strong" bear did not care about the electric shock.

"It [the fence] was bear-proof two days ago," he told the BBC, adding its voltage was about the same for rhino pens at zoos.

The bear has received support on social media, too.

The hashtag #fugaperlaliberta - meaning #escapeforfreedom in Italian - has been shared widely on Twitter as animal lovers cheer on the runaway bear.

Although WWF Italy insisted the animal's "danger to people is still to be demonstrated", there was a case of a brown bear attack in 2017.

A female bear was shot dead by foresters in the Alps after it seriously mauled an elderly man walking his dog.

M49 is part of the Life Ursus conservation project, and is one of around 50 to 60 brown bears living in the Trentino region.

Since the 1990s, conservationists have worked to reintroduce brown bears into the region, where they had been exterminated by hunters.