An armed man who attacked an immigration detention centre in the US city of Tacoma died after police officers opened fire, authorities say. 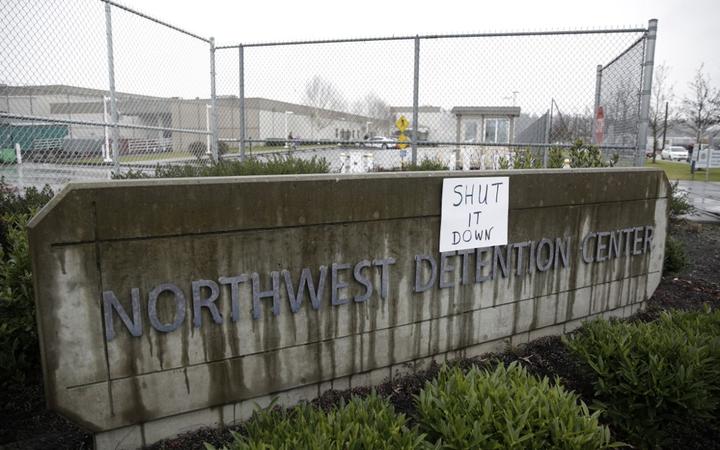 Police said they received reports that a man, armed with a rifle, was throwing "incendiary devices" at the Northwest Detention Center early on Saturday.

He was later identified as Willem Van Spronsen, who was reportedly involved in an earlier protest at the centre.

The shooting came a day before a major deportation operation was due to begin.

The raids by Immigration and Customs Enforcement (ICE) officials will target hundreds of immigrant families across 10 cities who have recently been ordered deported but have not yet left the country. It marks the latest move in US President Donald Trump's crackdown on migration.

Sunday's raids are not expected to affect Tacoma.

A police spokesperson told Reuters the incident on Saturday took place several hours after a peaceful rally outside the Washington state facility protesting against immigrant detentions.

In a statement, the Tacoma Police Department said the four police officers involved in the shooting had been placed on administrative leave, as is standard procedure in such cases, and an investigation into the incident was underway.

Police arrived at the privately run Northwest Detention Center at about 4am local time after receiving reports that a man was throwing "incendiary devices" at the facility and at vehicles in the car park, the statement said. The man allegedly set a vehicle on fire and attempted to ignite a propane tank and set buildings on fire.

Officers said he was wearing a satchel and carrying flares.

Tacoma Police Department confirmed that all four officers opened fire on the suspect, while it remains unclear if he fired at the officers.

He was found shot dead at the scene. A police official said it could not yet be confirmed who was responsible for his death.

He was reportedly accused of assaulting a police officer during a protest at the same centre last year.

Court documents cited by local media outlets said he wrapped his arms around the officer's neck and shoulders, as the officer was trying to detain another protester. After handcuffing him, police found that he had a collapsible baton and folding knife in his pocket.

A friend of Van Spronsen described him to the Seattle Times newspaper as an anarchist and anti-fascist. She said she believes he planned to provoke a fatal conflict with his actions on Saturday.

"I think this was a suicide. But then he was able to kind of do it in a way that spoke to his political beliefs," she said.

GEO Group, which runs the facility, told the Associated Press that "baseless accusations" about how detainees are treated there "have led to misplaced aggression and a dangerous environment for our employees, whose safety is our top priority".

President Donald Trump has always taken a hard line on immigration and during his election campaign made the building of a wall along the Mexican border a key pledge.

Earlier this year he declared a national emergency on the US southern border, claiming he needed special powers to build the wall to halt all illegal migration.

Controversial policies implemented by his administration in recent years include prosecuting adults who crossed the border illegally, resulting in children being separated from their parents.