Egypt has opened the "Bent" Pyramid built for pharaoh Sneferu, a 101-metre structure just south of Cairo that marks a key step in the evolution of pyramid construction. 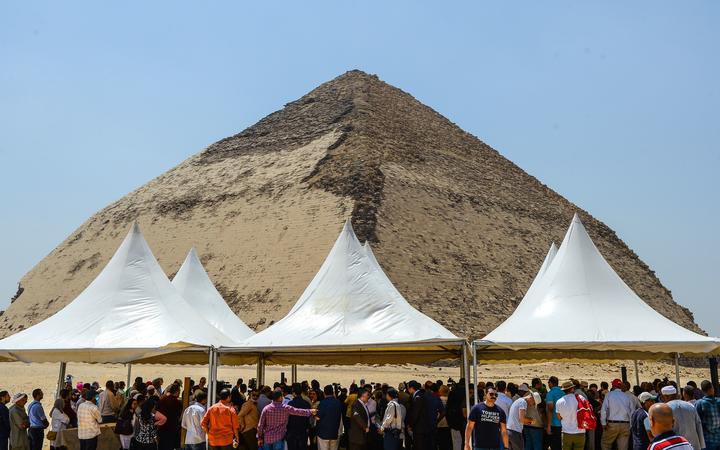 Visitors assemble in front of the "Bent" Pyramid for an event to mark the eventual opening of the pyramid to tourists. Photo: AFP

Tourists will soon be able to clamber down a 79-metre narrow tunnel from a raised entrance on the pyramid's northern face, to reach two chambers deep inside the 4600-year-old structure.

They will also be able to enter an adjoining 18-metre high "side pyramid", possibly for Sneferu's wife Hetepheres, opened for the first time since its excavation in 1956.

The "Bent" Pyramid is one of two built for Fourth Dynasty founding pharaoh Sneferu in Dahshur, at the southern end of the Memphis necropolis that starts at Giza.

Its appearance is unusual. The first 49 metres, which have largely kept their smooth limestone casing, are built at a steep 54 degree angle, before tapering off in the top section.

The angular shape contrasts with the straight sides of Sneferu's Red Pyramid just to the north, the first of ancient Egypt's fully formed pyramids and the next step towards the Great Pyramid of Giza. 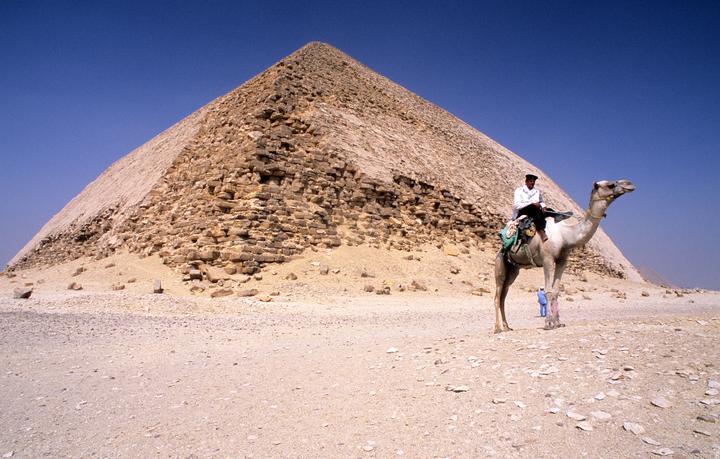 The first part of the pyramid is built at a steep 54 degree angle. Photo: AFP

"Exactly where he was buried - we are not sure of that. Maybe in this (Bent) pyramid, who knows?"

Authorities are seeking to promote tourism at Dahshur, about 28km south of central Cairo. The site lies in the open desert, attracts just a trickle of visitors, and is free of the touts and bustle of Giza. 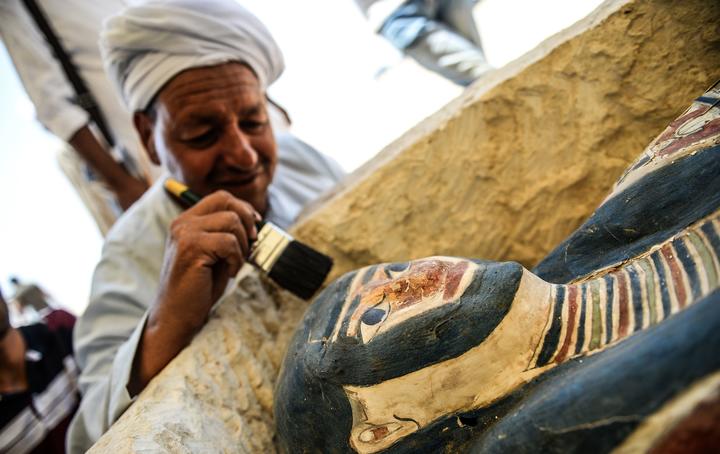 A man brushes off dust from a sarcophagus, 300m south of King Amenemhat II's pyramid at Dahshur necropolis, exposed near the Bent Pyramid, south of Cairo. Photo: AFP

As they opened the pyramids, archaeologists presented late-period mummies, masks, tools and coffins discovered during excavations that began near the Dahshur pyramids last year and are due to continue.

"When we were taking those objects out, we found... a very rich area of hidden tombs," Mr Waziri said.

The promotion of Dahshur is part of a wider push to boost tourism, an important source of foreign revenue for Egypt that dipped steeply after the country's 2011 uprising before gradually recovering.

Archaeologists also unveiled the nearby tomb of Sa Eset, a supervisor of pyramids in the Middle Kingdom, which has been closed since its excavation in 1894 and contains finely preserved hieroglyphic funerary texts.

Foreign ambassadors invited to attend the archaeological announcements were led sweating into the tight spaces of the tomb, which is not expected to be opened to the public for another two years.