A hidden internal structure in Khufu's Pyramid - the largest pyramid in Giza, Egypt - has been uncovered in research published in Nature this week. 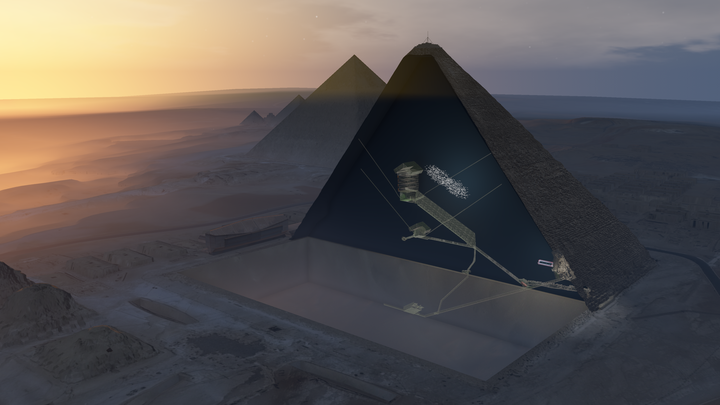 The team was trying to learn more about the internal structure of the pyramid using non-invasive muon imaging methods.

Muons are by-products of cosmic rays that can penetrate stone and distinguish cavities from solid formations.

The researchers found a large void around 30m long above the Grand Gallery, which was confirmed by three different techniques.

The Great Pyramid, or Khufu's Pyramid, was built during the reign of Pharaoh Khufu (Cheops), who reigned from 2509 to 2483 BC.

There is no consensus on how the monument was constructed.

To learn more about the internal structure, Mehdi Tayoubi, Kunihiro Morishima and colleagues imaged the pyramid using muons, which have distinct trajectories when moving through stone or air, making it possible to distinguish cavities from solid formations.

The precise structure and role of the void remained unknown, but the findings could pave the way for further studies that could help researchers understand the pyramid and its construction process.

The research was published in the journal Nature.