Twenty-six people have been killed after Al Shabaab Islamist extremists detonated a suicide car bomb and stormed a hotel in Somalia, with a regional presidential candidate, journalists and a humanitarian worker among the dead. 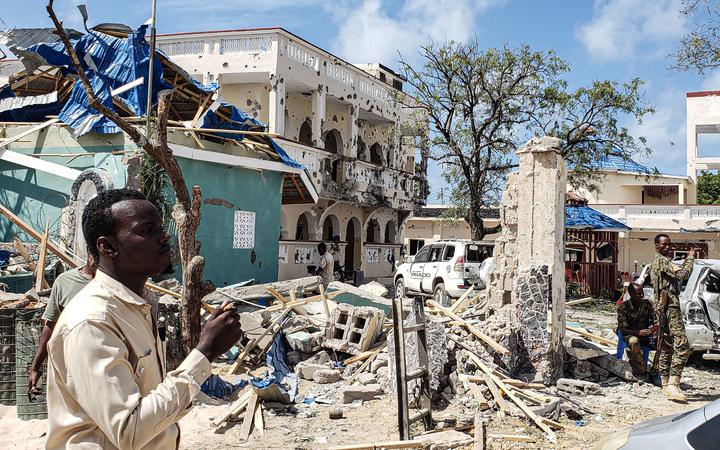 A man passes in front of the rubble of the popular Medina hotel in Kismayo, scene of a terror attack. Photo: AFP

Police earlier said at least 13 had been killed at the hotel in Kismayo, but the death toll rose sharply. At least 56 people were injured.

Kenyans, Americans, a Briton and Tanzanians are among the dead, Jubbaland region's president Ahmed Mohamed said in a statement.

A presidential candidate for upcoming regional elections was also killed in the attack.

Prominent Somali-Canadian journalist Hodan Nalayeh was among those killed, alongside her husband.

I’m saddened by the death of my dear friend the Somali Canadian journalist, Hodan Nalayeh, who was among those killed in today's attack in #Kismaayo. She was a bright star & a beautiful soul that represented the best of her people & homeland #Somalia at all times. RIP sister. pic.twitter.com/DGkEcTPED4

"First we targeted [the hotel] with a suicide car bomb and then armed mujahideen [guerrilla fighters] stormed the hotel. We are still fighting inside the hotel," he said.

"There are many dead bodies inside the hotel, including a dead white man. We control the hotel now." 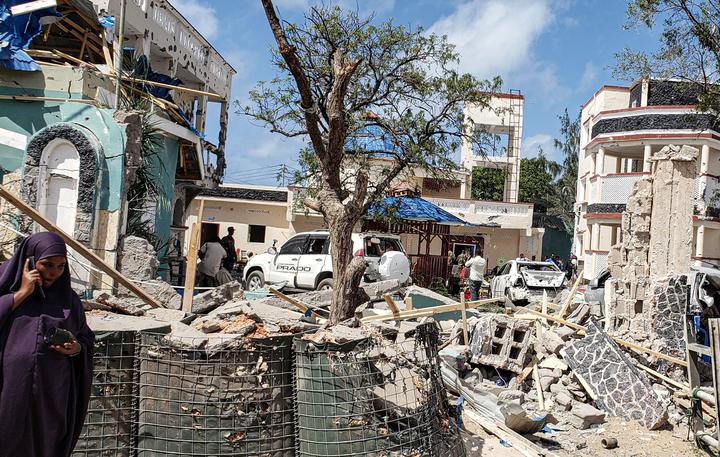 Al Shabaab has claimed responsibility for the attack. Photo: AFP

Members of the militant group carried out the attack on Friday (local time) while local elders and politicians were meeting to discuss the approaching regional elections.

The same group claimed responsibility for an attack on a hotel in Kenya in January that killed 21 people.

"Many people have been rescued. The four attackers were shot dead," he said.

"These are the prominent people. The death toll is sure to rise," he said.

The Somali Journalists Syndicate said in a statement that two journalists based in Kismayo had been confirmed dead in the attack.

"Mohamed Omar Sahal, SBC TV correspondent based in Kismayo and Hodan Nalayeh, female TV journalist and founder of Integration TV [are] both among [those] killed," Abdalle Ahmed Mumin, the syndicate's secretary general, said.

It said Ms Nalayeh had recently returned from Canada.

"The deaths of Hodan, 43 and Sahal, 35, become the first journalists killed in the country this year," the statement said.

Harun Maruf, a Voice of America journalist and author of Inside Al Shabaab, said on Twitter Ms Nalayah strived to write uplifting stories about Somalia and the Somali diaspora.

BREAKING: Inspirational TV personality who returned from Canada to report positive stories about Somalia, Hodan Nalayeh, killed in Al-Shabaab complex attack in Kismayo - Minister @JustAwHirsi confirms. Hodan was the founder of @IntegrationTV that reports on local and diaspora. pic.twitter.com/cjRQ2TPflg

Aden Aw Hirsi, Somalia's Minister of Planning and International co-operation, said on Twitter: "We are heartbroken by their sudden violent deaths".

"But rest assured, we are also as mad as hell because of it."

We admit, we are heartbroken by their sudden violent deaths. But rest assured, we are also as mad as hell because of it. pic.twitter.com/rJ4v2I5MUP

Hussein Nur, a shopkeeper in Kismayo, told Reuters: "There were many people including officials and elders, mostly from one clan, who were discussing the coming Kismayo election."

Mr Nur was referring to elections in the city due some time in August. 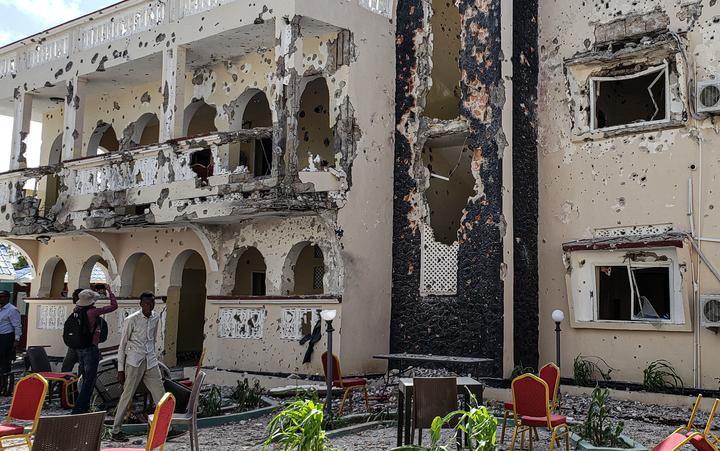 Al Shabaab was ejected from Mogadishu in 2011 and has since been driven from most of its other strongholds.

It was driven out of Kismayo in 2012. The city's port had been a major source of revenue for the group from taxes, charcoal exports and levies on arms and other illegal imports.

Kismayo is the commercial capital of Jubbaland, a region of southern Somalia still partly controlled by Al Shabaab.

It remains a major security threat, with fighters frequently carrying out bombings in Somalia and neighbouring Kenya, whose troops form part of the African Union-mandated peacekeeping force that helps defend the Somali Government.