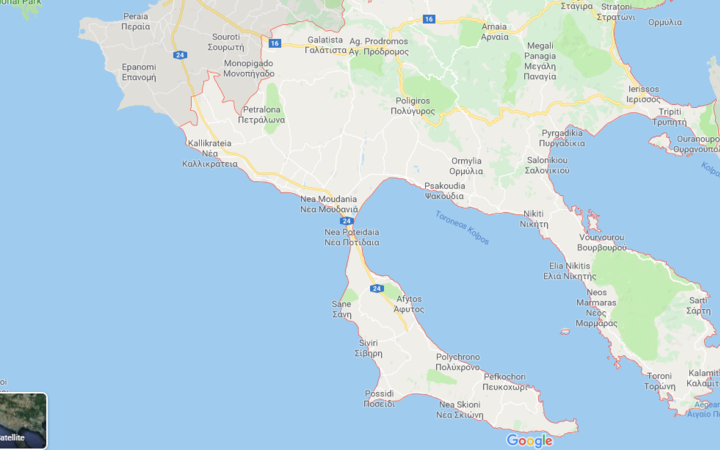 Greece's Halkidiki peninsula is a region popular with tourists in the summer. Photo: Photo / Google Maps

Television footage showed strong winds sweeping through a restaurant in the Halkidiki peninsula, a region popular with tourists in the summer.

Streets in towns in the area were dotted with uprooted pine trees and overturned motorcycles, photographs posted on websites showed.

"It is the first time in my 25-year career that I have lived through something like this," Athansios Kaltsas, director of the Nea Moudania Medical Centre, where many of the injured were treated for fractures, told Greek television.

Mr Kaltsas said patients taken to the clinic ranged in age from 8 months to over 70. Some suffered head injuries from trees and other falling objects.

Elsewhere in the region, a woman and an 8-year-old boy, both Romanian nationals, were killed after a roof collapsed on a restaurant in Nea Plagia. A man and a young boy, both Russians, died after a tree collapsed near their hotel in the seaside town of Potidea, authorities said.

Such severe weather is unusual in Greece, where summers are typically hot and dry. Meteorologist Klearxos Marousakis described conditions as "extremely unusual" for this time of year.

Meteorologists forecast it would continue to rain in the area until about 9am today local time.

Authorities declared Halkidiki in a state of emergency, and Greece's newly-appointed citizens' protection minister was due to visit the area. At least 140 firefighters were operating in the area.