German Chancellor Angela Merkel has been seen shaking for a third time in a month. 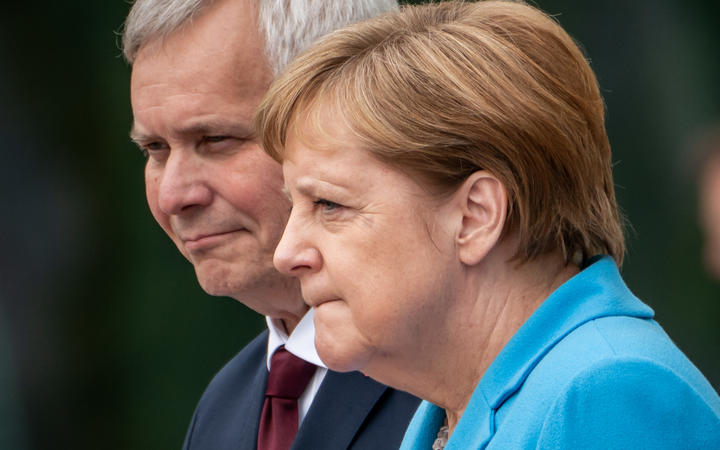 Video footage shows Mrs Merkel trembling, shaking back and forth alongside Finland's prime minister during a ceremony in Berlin.

After the incident, Mrs Merkel said she was "very well" and there was "no need to worry".

A government spokesperson said she would continue meetings as planned.

Mrs Merkel, 64, was last seen trembling two weeks ago ahead of a trip to Japan for the G20 summit. She told journalists at the summit she was fine.

On Wednesday, the chancellor gripped her hands as she tried to control her shaking, standing alongside Prime Minister Antti Rinne.

According to the Focus website, the shaking affected her whole body and lasted over a minute.

She was first seen shaking last month during a welcome ceremony in Berlin for Ukrainian President Volodymyr Zelensky.

In a press conference, Mrs Merkel said she was "working through what happened during the military honours with President Zelensky."

"This process is clearly not finished yet but there is progress and I must live with this for a while but I am very well and you don't need to worry about me,' she said.

Mrs Merkel's spokeswoman, Ulrike Demmer, was questioned by German media as to why the government had not provided any information on her health. Ms Demmer said she had "nothing to add".

The chancellor's office has repeatedly dismissed concerns about her health.

But asked by the Focus website what might be wrong this time, leading Bavarian GP Jakob Berger said the chancellor should undergo urgent health checks. "Her doctors must now press for some research," he said.

Following her second shaking incident, another health specialist, Dr Christoph Specht, said that the chancellor could have contracted an infection. He said shivering indicated an infection that was flaring up again.

German media have reacted with alarm to Mrs Merkel's health scare. "The health of Angela Merkel is now a political issue," an editorial in the Bild newspaper read.

Mrs Merkel is now in her fourth term as chancellor, a role she first began in November 2005. She has said she will leave politics when her current term ends in 2021.

She has been in good health while in office, and even worked from home after a knee operation in 2011. She also suffered a fall while skiing in 2014. Her absences were only brief on those occasions.