Russia says the main cause of the deadly incident on board a submersible which killed 14 crew on Monday was a fire in the battery compartment. 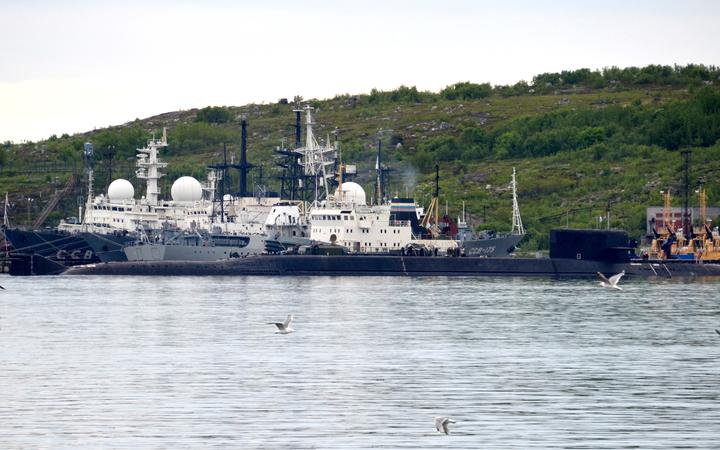 A picture taken on July 2, 2019, shows an unidentified submarine in the city of Severomorsk, in Russia. Photo: AFP

Defence Minister Sergei Shoigu also said the top-secret military craft was nuclear-powered but the reactor had been isolated from the fire.

The 14 senior officers died of smoke inhalation as a result of the fire on the submersible in the Barents Sea.

The craft is now at Severomorsk, the main base of Russia's Northern Fleet.

It has not been named, but it is a deep-sea research vessel, which had been exploring the Arctic seabed, the Russian government daily Rossiiskaya Gazeta says.

It had been descending to extreme depths on difficult missions, the paper reported.

Those missions were not specified, but Russia is in an international race to stake territorial claims in the Arctic, which is believed to be rich in oil and gas and other minerals.

"The main cause has been established - it was a fire in the battery compartment, and then it spread," Mr Shoigu told President Vladimir Putin in a meeting on 4 July, according to the Kremlin website.

"The nuclear power unit on the vessel has been fully isolated and nobody is in that section. The crew took all the necessary measures to protect the unit, and it is in full working condition. This gives us hope that in quite a short time the vessel can be put back into service."

The fire broke out as the submersible was in Russian territorial waters, the defence ministry says.

The ministry has now named all 14 victims, and all were senior officers. Seven were first-rank captains, including two with Hero of Russia awards; three were second-rank captains; two were third-rank captains; one was a captain-lieutenant and one a lieutenant-colonel. 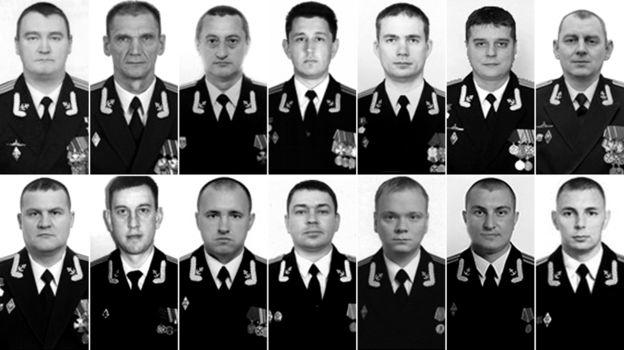 The Russian Defence Ministry published these photos of the officers who died and named them. Photo: Ministry of Defence of the Russian Federation

They were from a unit based in Peterhof, a district of St Petersburg.

The ministry says several crew members survived and are in hospital, but no figure has been given. A "civilian specialist" was rescued by the crew during the fire.

Severomorsk was also home to the Russian Kursk nuclear submarine, which sank in 2000 killing 118 sailors.

Mr Putin was heavily criticised for the way he handled the Kursk disaster. Media reports at the time showed him enjoying a holiday at a Black Sea villa as families of the victims demanded information about their relatives.

In the latest incident, the Kremlin has also given few details about the vessel, "in the interests of the state and state security".

What sort of submersible was it?

Several newspapers, quoting military sources, identified the stricken vessel as an AS-12 - nicknamed "Losharik" - or AS-31 submersible.

These mini-subs can dive up to 6000m and are designed to be carried under the belly of a larger submarine. They are operated by the Russian military's Chief Directorate for Deep Water Research - the GUGI - often referred to as the country's "underwater intelligence service".

The mini-sub's nickname "Losharik" comes from a Soviet-era cartoon character - a horse made out of spheres.

The craft's design consists of titanium spheres - titanium being an especially robust metal - connected by passageways inside a light-weight hull.

A Russian specialist military journal, Voyennoye Obozrenie, reports that the Losharik can descend to 6000m, is about 79m long, has a displacement of 2000 tonnes and can reach a speed of 30 knots.

In the Barents Sea the vessel would have been studying the relief of the seabed for the navy to update its charts, military expert Viktor Baranets told the defence ministry channel TV Zvezda.

The seabed changes frequently, and naval vessels need the data to avoid any dangers, said Mr Baranets, a retired colonel who writes for the daily Komsomolskaya Pravda.