Police firing tear gas have evicted protesters who stormed and ransacked parliament on the anniversary of the city's return to Chinese rule. 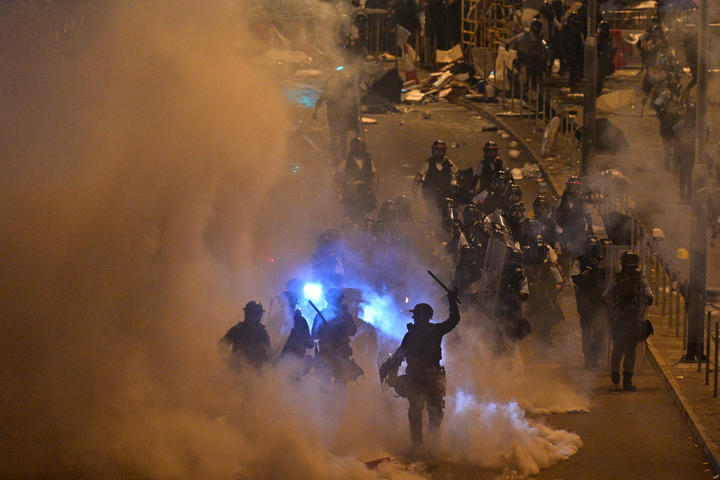 Police arrived by bus and ran into position as about a thousand protesters gathered around the Legislative Council building in the heart of the former British colony's financial district on Monday evening.

Police fired several rounds of tear gas as protesters held up umbrellas to protect themselves or fled.

Plumes of smoke billowed across major thoroughfares and in between some of the world's tallest skyscrapers.

Protesters had carried road signs, others corrugated iron sheets and pieces of scaffolding, as they barged into the council building.

Some sat at legislators' desks, checking their phones, while others scrawled "anti-extradition" on chamber walls.

Other graffiti called for Hong Kong leader Carrie Lam to step down, while pictures of some lawmakers were defaced."HK Is Not China" was painted in black on a white pillar.

After midnight, hundreds of police secured the building following a warning to protesters to clear it. 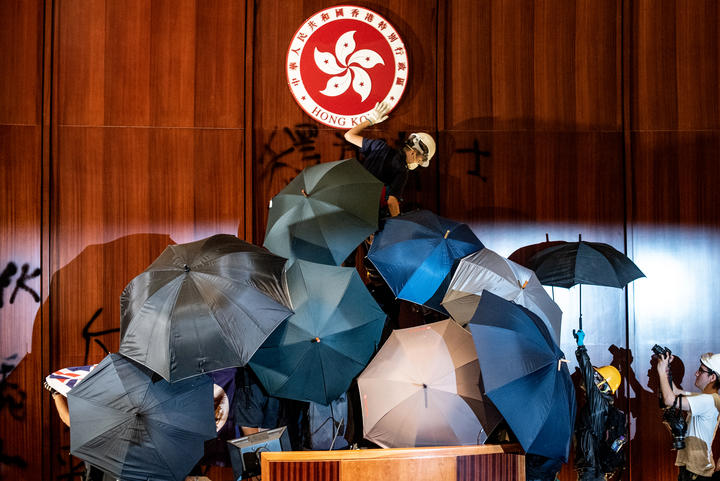 Protesters scrawled graffiti on the walls of the parliament building. Photo: AFP

The government had called for an immediate end to the violence, saying it had stopped all work on extradition bill amendments and that the legislation would automatically lapse in July next year.

The central government offices said they would close on Tuesday "owing to security consideration", while all guided tours to the Legislative Council complex were suspended until further notice.

Riot police in helmets and carrying batons earlier fired pepper spray as the stand-off continued into the sweltering heat of the evening.

The protesters, some with cling film wrapped around their arms to protect them from tear gas, once again paralysed parts of Hong Kong as they occupied roads after blocking them off with metal barriers. 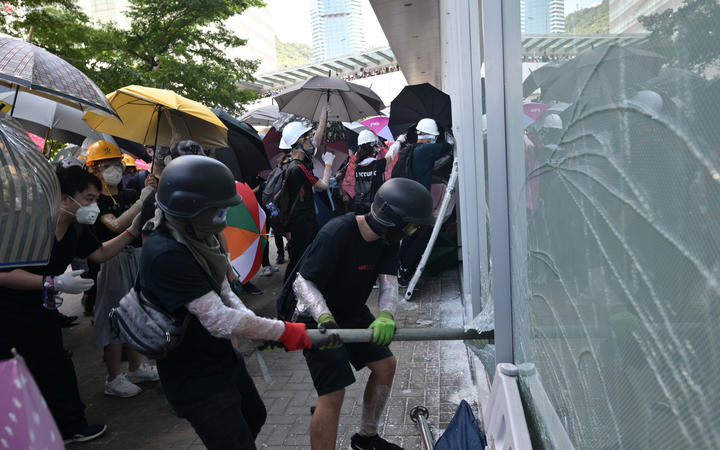 Protesters on Monday attempt to break a window at the government headquarters in Hong Kong. Photo: AFP

Ms Lam suspended the extradition bill on 15 June after some of the largest and most violent protests in the city in decades, but stopped short of protesters' demands to scrap it.

The Beijing-backed leader is now clinging on to her job at a time of an unprecedented backlash against the government, which poses the greatest popular challenge to Chinese leader Xi Jinping since he came to power in 2012.

Opponents of the extradition bill, which would allow people to be sent to mainland China for trial in courts controlled by the Communist Party, fear it is a threat to Hong Kong's much-cherished rule of law.

Hong Kong returned to China under a "one country, two systems" formula that allows freedoms not enjoyed in mainland China, including freedom to protest and an independent judiciary.

China has been angered by criticism from Western capitals, including Washington and London, about the legislation.

Beijing said on Monday that Britain had no responsibility for Hong Kong any more and was opposed to its "gesticulating" about the territory.

Tens of thousands marched in temperatures of around 33C from Victoria Park in an annual rally.