Italy's far-right interior minister, Matteo Salvini, has accused the captain of a ship carrying rescued migrants of trying to sink a police boat. 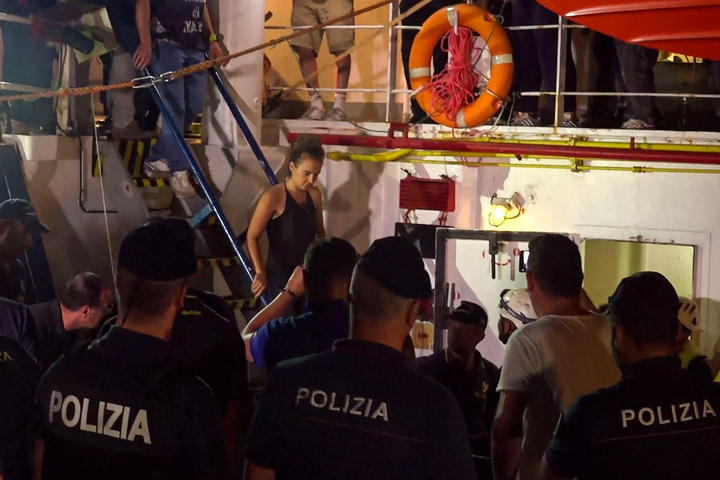 Carola Rackete being arrested by Italian police in the Italian port of Lampedusa. Photo: AFP

Carola Rackete was arrested at the Italian port of Lampedusa after a two-week stand-off with police at sea.

Her vessel, Sea-Watch 3, was banned from docking, but it eventually entered the port on Friday night.

On Saturday, Mr Salvini called Ms Rackete a "rich, white, German woman" who had committed "an act of war".

"She tried to sink a police launch with officers on board at night," he said. "They say 'we're saving lives', but they risked killing these human beings who were doing their job, it's clear from the videos."

Mr Salvini added: "A vessel weighing hundreds of tonnes tried to ram... a police launch with officers aboard, who managed to get out of the way to save their lives. That's a criminal act, an act of war."

Ms Rackete could face a 10-year jail term if convicted of attacking a police boat.

She had rescued 53 migrants off the coast of Libya on 12 June. The migrants were drifting on an inflatable raft in the Mediterranean sea. 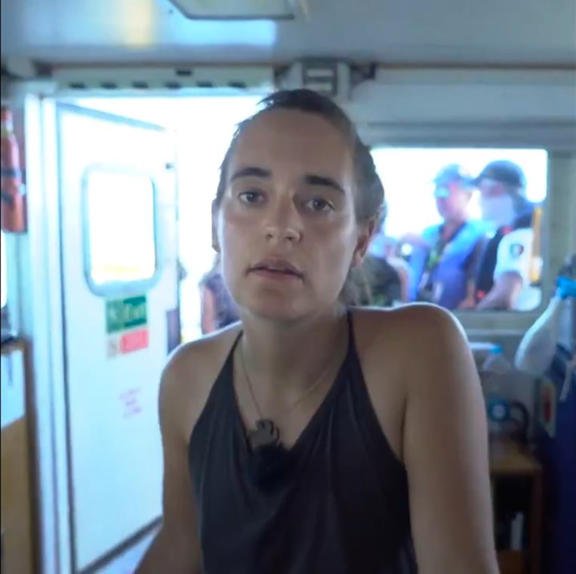 After docking in the Italian port, the 31-year-old German was filmed being led away by police.

Some 13 migrants have been taken in by the authorities for health reasons, while Italian Prime Minister Giuseppe Conte told the G20 summit that several EU countries had agreed to take in the 40 remaining migrants.

Mr Salvini wants clarity on "numbers, timelines and means" before he allows them off the ship, interior ministry sources told AFP news agency.

He previously said the migrants could only disembark if they headed straight to the Netherlands, where the Sea-Watch 3 is registered, or to Germany.

Ms Rackete said Sea-Watch had tried to co-operate with the authorities, engaging with Italy, Germany, Malta and France and opening contacts with the European Commission.

However, after two weeks in limbo, the German charity Sea Watch said the boat was forced to enter Italian waters, as there was no other option left to ensure the migrants' safety.

The "rich, white, German woman" who riled Mr Salvini has a nautical degree and studied environmental sciences in the UK.

The 31-year-old has taken part in expeditions, both for research organisations and for the environmental group Greenpeace.

Now a left-wing hero, she has very little social media presence, except for posting video updates of the rescue mission on Twitter in recent weeks.

In the latest one, she said: "I have decided to enter the harbour, which is free at night, on my own."

Sea Watch chairman Johannes Bayer expressed support for Ms Rackete's actions and tweeted that he was "proud of our captain".

Statement of our Captain, #CarolaRackete, before entering Port with the #SeaWatch3.

“We are proud of our captain, she did exactly the right thing. She upheld the law of the sea and brought people to safety." – #SeaWatch chairman Johannes Bayer pic.twitter.com/lfZ16Pq9F1