Donald Trump has lashed out at the "ignorant and insulting statement" released by Iran after the US president announced fresh sanctions against the Middle Eastern nation. 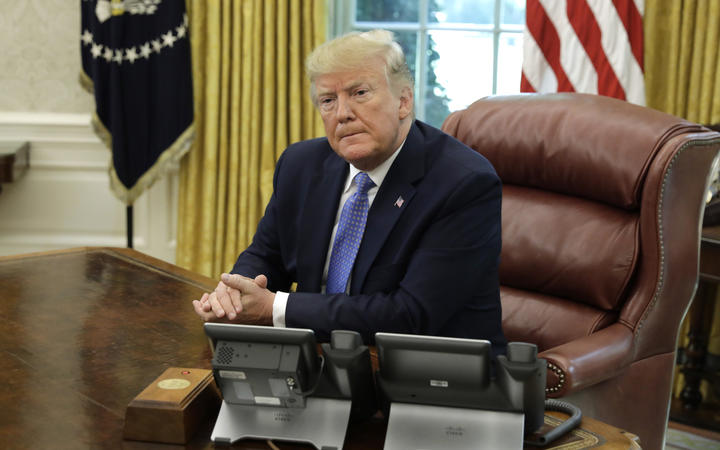 US President Donald Trump listens during a meeting in the Oval Office at the White House on 25 June. Photo: AFP

He unveiled the sanctions on Monday, saying they were a response to recent "aggressive behaviour" by Iran.

The sanctions target a number of individuals, notably Iran's Supreme Leader, Ayatollah Ali Khamenei, who Mr Trump said was "ultimately responsible for the hostile conduct of the regime".

The US has alleged Ayatollah Khamenei has access to vast wealth which helps fund the Islamic Revolution Guard Corps (IRCG). In a 2018 op-ed, US Secretary of State Mike Pompeo suggested it was as much as $95 billion ($NZ143bn) and was "used as a slush fund for the IRGC".

But Mr Rouhani questioned why the US would single out a man who he said only "owns a Hoseyniyyeh [prayer venue] and a simple house", calling the sanctions "outrageous and idiotic". 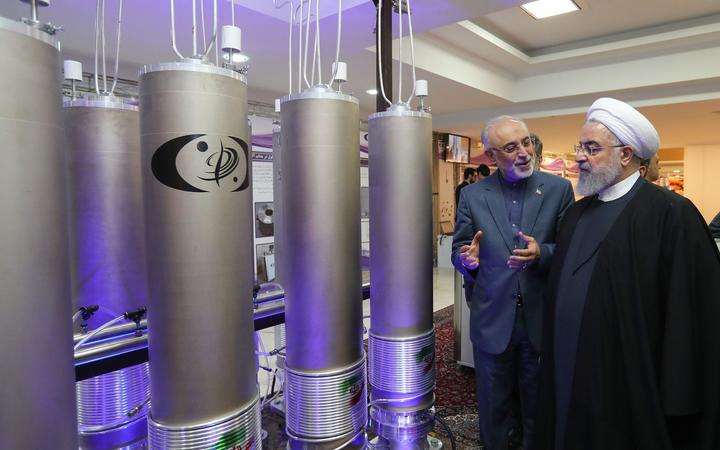 He also said it suggested the US is lying about wanting dialogue.

But Mr Trump said the only thing Iran understood was "strength and power, and the USA is by far the most powerful military force in the world".

"Any attack by Iran on anything American will be met with great and overwhelming force," he added in a tweet.

"In some areas, overwhelming will mean obliteration."

Who do the new sanctions target?

Some analysts said the sanctions were largely symbolic, although the US treasury department said the measures would lock up billions of dollars in assets.

Mr Trump said the measures would deny Ayatollah Khamenei, his office, and those closely affiliated with him, access to key financial resources and support.

The treasury also said it was also imposing sanctions on eight senior commanders of the IRGC's navy, air force, and ground forces, including the head of an air force unit that the US said had ordered the shooting down of a US surveillance drone last week.

Iranian Foreign Minister Mohammad Javad Zarif - who was the country's top negotiator on the nuclear deal - would be targeted later this week, it added.

How did tensions between the two countries escalate?

Tensions have increased steadily since May 2018, when Mr Trump abandoned the landmark 2015 nuclear deal between Iran and six world powers, and began reinstating sanctions to force Iran to renegotiate the accord.

Last month, Iran scaled back some its commitments under the deal, including on the amount of low enriched uranium it is allowed to stockpile, after Mr Trump ended exemptions from US secondary sanctions for countries still buying Iranian oil.

On Tuesday - after Mr Trump's tweets - Iran's deputy foreign minister said "with attention to the promises that have not been carried out from the European side", it had no reason left to carry out its nuclear deal commitments unilaterally,

Iran previously announced the stockpile limit would be breached on 27 June, and it plans to announce further reductions in its commitments on 7 July.

Tensions have manifested themselves in other ways, including the shooting down of the US drone over the Strait of Hormuz. Iran said it had violated its airspace; the US insisted it was over international waters.

The US has also accused Iran of being behind two sets of explosions that have damaged six oil tankers in the region, through which a fifth of the world's oil passes each day. Iran has rejected the allegation.

Despite this, Mr Trump insisted he was willing to start negotiations on a new nuclear accord that would also see Iran agree to curb its ballistic missile programme and end what he calls its "malign" activities in the Middle East.

"If they don't want to, that's fine too. But we would love to be able to. And, frankly, they might as well do it soon," he said.