Israel Folau's donations page has been taken down. Photo: Photosport

Sacked Australian Wallabies star Israel Folau's donations page has been taken down after GoFundMe said it breached its terms of service.

He was sacked last month for a comment on social media which included the claim that homosexuals are destined for hell unless they repent for their sins.

A deep magnitude 7.5 earthquake has struck in a remote area of Indonesia's Banda Sea but no tsunami alert was issued.

It prompted people to run from their homes in East Timor and was also felt in parts of Indonesia, including the holiday island of Bali.

It was felt strongly in Darwin, more than 700km away, and led to the evacuation of a number of shops and office buildings in the CBD.

No damage or injuries were reported.

Turkey's opposition has dealt President Tayyip Erdogan a stinging blow by winning control of Istanbul in a re-run mayoral election.

Ekrem Imamoglu of the Republican People's Party secured 54.21 percent of votes - a far wider victory margin than his narrow win three months ago.

The previous result was annulled after protests from Mr Erdogan's AK Party, which said there had been widespread voting irregularities.

Tens of thousands of Imamoglu supporters took to the streets to celebrate his victory.

The death toll from the collapse of a seven storey building in a coastal town in Cambodia has risen to 24 and authorities say they don't expect to find any more survivors under the rubble. 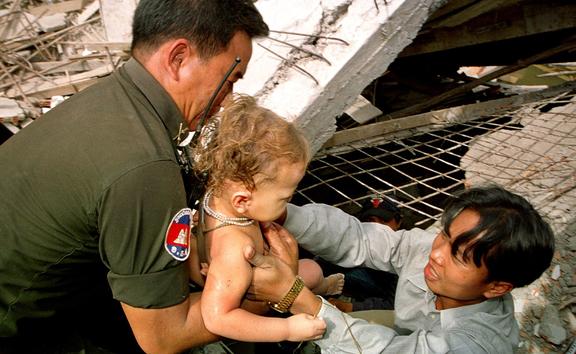 A Cambodian rescuer helped by a policeman, removes a baby from the wreckage as he survived the collapse of a building in Phnom Penh. Photo: Photo / AFP

The Chinese-owned building, which was under construction, collapsed in the town of Sihanoukville on Saturday, sparking a large search and rescue operation.

The collapse has raised questions about the speed of Chinese development in the country.

Three Chinese citizens and a Cambodian man, who were involved with the project, have been taken in for questioning.

Eleven Republican senators from the US state of Oregon are in hiding.

They walked out of Salem's Capitol building late last week and state police have been given authorisation to track them down.

Oregon's Democrats, who have a clear Senate majority, want to pass landmark climate change legislation but local Republicans have fled to stop that happening.

Read more: Why a group of US state senators are being hunted by police

IS fighters' children heading back to Australia

Eight children, including six taken by their Australian parents to join the Islamic State group, have been evacuated from a Syrian refugee camp.

The group includes three orphaned children of notorious Australian militant Khaled Sharrouf who once posted a photo of his young son holding a severed head.

The government was able to evacuate the children in secret in conjunction with aid groups.

They are currently in a secret location and will be returned to Australia.

Investigation after passenger left on plane

Air Canada has begun an investigation into how crew members disembarked from a plane without noticing a sleeping passenger who was left behind.

Tiffani Adams said she woke up on the aircraft late at night, after a flight into Toronto.

She said her mobile phone battery was flat and she couldn't communicate with anyone outside the aircraft.

After no one saw the "SOS signals" she made by shining a torch out the window, she unbolted a cabin door and managed to alert ground crew, who got her out.