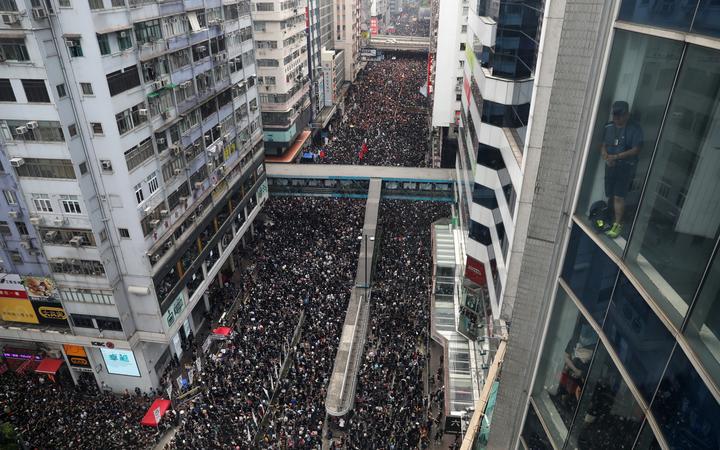 The number has not been independently verified. If confirmed, it would be the largest protest there since 1989.

The masses turned out despite the suspension of the bill - which would allow extradition from Hong Kong to mainland China - on Saturday.

Many protesters, who fear increased Chinese influence over Hong Kong, are calling on her to resign over the unrest.

They are also demanding that the bill be scrapped, not just suspended.

The new law prompted hundreds of thousands to demonstrate in the past week.

Hong Kong's Chief Executive Carrie Lam said on Saturday that the plans had been "suspended" for the time being.

Protest leaders, however, are demanding it be permanently scrapped.

By early Sunday afternoon, large crowds had gathered in the city's Victoria Square, many wearing black or carrying white flowers. 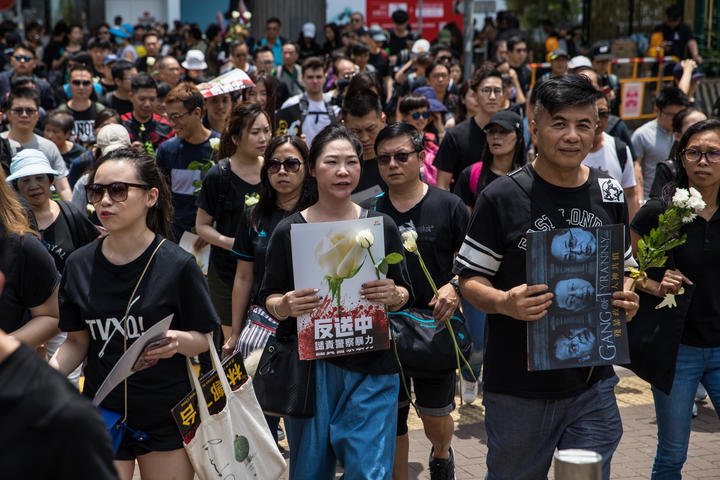 The progress of the march was slow, as the large numbers of people blocked many streets and crowded train stations.

Some carried placards accusing China of "killing" Hong Kong residents, others held white flowers to mourn a protester who fell to his death on Saturday after climbing a ledge to unfurl an anti-extradition banner.

Ms Ng and Mr Chu have joined the protests at Victoria Park - say it's the first time protesting against the extradition proposals. Say they were angered by police use of force. Wearing white flowers to commemorate yesterday's protester who fell to his death. pic.twitter.com/BgJ2Nn3PJz

Protesters also carried placards that read "the students did not riot", in response to police labelling Wednesday's student protests a riot - an offence punishable by up to 10 years in jail.

There was skepticism among some protesters about Ms Lam's decision to suspend the bill. "I think she's only delaying the bill now to trick us into calming down," Catherine Cheung, 16, told Reuters news agency.

What is the controversy about?

Protesters are concerned at increased influence by Beijing in Hong Kong, and the demonstrations over the bill have sparked some of the worst violence seen in years.

Hong Kong is a former British colony, but was returned to Chinese rule in 1997 under a "one country, two systems" deal that guarantees it a level of autonomy.

The government had argued the proposed extradition bill would "plug the loopholes" so that the city would not be a safe haven for criminals, following a murder case in Taiwan.

Critics have said the legislation would expose people in Hong Kong to China's deeply flawed justice system and lead to further erosion of the city's judicial independence. 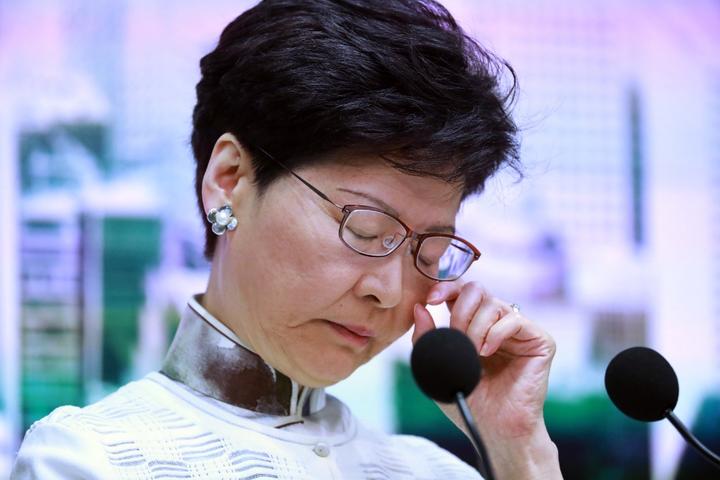 Carrie Lam has stopped short of saying the bill would be permanently shelved. Photo: AFP

On Saturday, after days of protests, Ms Lam said she had heard the calls for her government to "pause and think".

"I feel deep sorrow and regret that deficiencies in our work - and various other factors - have stirred up substantial controversies," she added.

But she stopped short of saying the bill would be permanently shelved.

Jimmy Sham, from protest group the Civil Human Rights Front, said the announced suspension was like a "knife" that had been plunged into the city.

"It's almost reached our heart. Now the government said they won't push it, but they also refuse to pull it out," he said.

Why is there concern about China?

The changes would allow for criminal extradition requests from authorities in mainland China, Taiwan and Macau - decided on a case-by-case basis by Hong Kong courts.

But many fear the law could be used to target political opponents of the Chinese state.

It comes after a high-profile case where a Hong Kong man was accused of murdering his girlfriend on holiday in Taiwan but could not be extradited.

Taiwanese officials are against the changes - due to their own concerns about the impact they could have.

Taiwan is in effect independent, but China considers it a breakaway province.

The government there has even said it would not accept the extradition of the accused man if it was under the proposed new rules.

How did protests unfold?

A large-scale march, which organisers said drew more than one million people, was held last Sunday.

Then on Wednesday tens of thousands gathered to blockade streets around government headquarters to try to stop the second reading, or debate, of the extradition bill.

Tensions boiled over and 22 police and 60 protesters were injured. Authorities say 11 people were arrested.

The police have been accused of excessive force by some rights groups.

Until Saturday's announcement, Ms Lam had not spoken publicly since she labelled the protests "organised riots" during a tearful address. 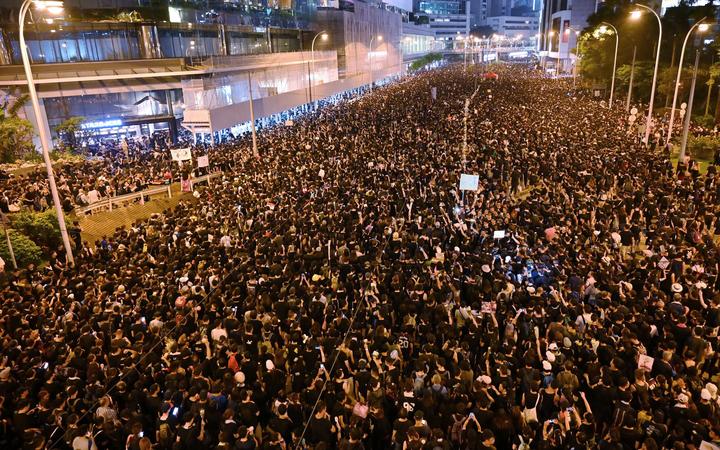 Thousands of protesters dressed in black take part in a rally against a controversial extradition law proposal in Hong Kong . Photo: AFP or licensors

Is Hong Kong part of China?

Hong Kong was a British colony from 1841, when China ceded the island to the British after the First Opium War - which had erupted over British traders smuggling opium into China. It remained a colony until sovereignty was returned to China in 1997.

It is what China calls a special administrative region - enjoying a great deal of autonomy that has made it a key business and media hub in the region.

But it remains subject to pressure from mainland China, and Beijing remains responsible for defence and foreign affairs.