Franco Zeffirelli's bold ideas and enduring energy made him one the 20th Century's most creative and prolific directors. 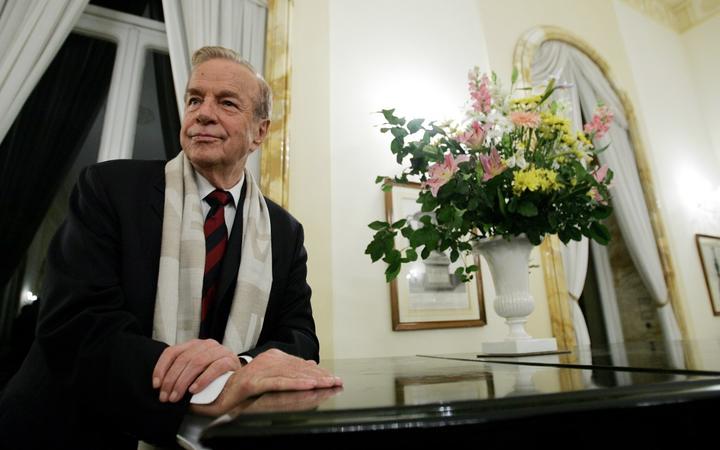 Franco Zeffirelli poses at the British Embassy in Rome before receiving the medal of knighthood from the British ambassador to Italy in 2004. Photo: AFP

Whether he was directing Elizabeth Taylor as Shakespeare's Shrew, staging more than 120 operas or serving in the Italian Senate, Zeffirelli remained a cultural icon well into his 80s.

The maestro worked on a famously epic scale in film, theatre and opera, where his productions formed the core repertory of such houses as the Met and La Scala.

He once said of himself: "I'm not the greatest director of opera in the world. I'm the only one."

Gianfranco Zeffirelli was born on 12 February 1923 on the outskirts of Florence.

The illegitimate son of a philandering merchant, young Franco's surname was given to him by his mother.

She wanted "Zeffiretti", a word meaning "little breezes" taken from a Mozart opera, but the wrong spelling appeared on his birth certificate, and he became Zeffirelli.

It was to his mother, who died when he was just six, that he attributed what he referred to as his understanding of the female psyche.

"Women represent the warmth of life - they're frail and vulnerable. They only become unpleasant when they feel the need to create a defence, and they exaggerate. That's why they become divas."

He grew up among English expatriates in Florence, an experience he returned to in his film Tea with Mussolini.

His early training as an architect was interrupted by war; Zeffirelli fought with the Italian partisans and became an interpreter for the British army after the Allied invasion of Italy.

In peacetime he returned to his architectural studies until a viewing of Laurence Olivier's film of Henry V inspired him to move to the theatre.

His sometime lover Luchino Visconti gave him a role as assistant director in the 1948 film La Terra Trema.

Over the next decade, he worked with a number of directors before moving on to design and direct stage performances in his own right.

His first film as a director was The Taming of the Shrew in 1967, originally intended as a vehicle for the Italian actors Sophia Loren and Marcello Mastroianni.

In the event, Richard Burton and Elizabeth Taylor took the leading roles after the couple had invested more than $1m in the production, in return for a share of the profits instead of a salary.

The film was well received by both critics and audience although Shakespearean purists were incensed by Zeffirelli's cavalier approach to the original text.

It was his follow-up film, Romeo & Juliet, that cemented his reputation. He cast two then unknown teenagers, Leonard Whiting and Olivia Hussey, in the title roles.

Because of the age of the stars, the film became popular among teenagers and was used by some schools as the definitive film version of the play.

However, the film was controversial because, in one scene, 15-year-old Olivia Hussey is clearly nude. For many, she was too young to to play the part in this way.

There was a story at the time that she was banned from the film's premier because she was too young to witness her own nudity, but this is almost certainly an urban myth.

Imaginative casting became something of a trademark; he would later cast Mel Gibson in Hamlet.

Brother Sun, Sister Moon, about St Francis of Assisi, saw Zeffirelli move into religious themes, which he continued with his miniseries Jesus of Nazareth.

Robert Powell as Christ led a cast of stars that included no fewer than seven Oscar winners. When it was shown by ITV in the UK at Easter 1977, it attracted an audience of more than 20 million.

The series was shown throughout the Western world and still makes frequent Easter appearances on TV.

Throughout this period, Zeffirelli continued to direct opera, his first love. He staged performances with many of the greatest singers of the era including Dame Joan Sutherland, Tito Gobbi and Maria Callas.

His enduring successes included Tosca, which ran for 40 years in repertory at London's Royal Opera House.

"I have always believed that opera is a planet where the muses work together, join hands and celebrate all the arts."

Callas, whom he idolised, provided the subject for his 2002 film, Callas Forever, about the last days of her life. He admired her most because, he said, "she couldn't accept to compromise".

He continued directing films with mixed success. The Champ, released in 1979, was not well received and Endless Love, which appeared two years later, was panned by the critics.

However, a 1996 adaptation of Charlotte Bronte's Jane Eyre was a success.

Zeffirelli held some forthright political opinions while serving for two terms in the Italian senate as a member of Silvio Berlusconi's right-wing Forza Italia party.

He derided communists as "frauds about to take over my country" and called for the death penalty for women who had had abortions. He later served as an adviser to the Ministry of Culture.

In 1996, he revealed his homosexuality but found himself under attack from the gay community for his support of the Roman Catholic Church's stance on gay issues.

A committed Anglophile, he become the first Italian citizen to receive an honorary knighthood from the UK, which was awarded in 2004.

Zeffirelli was once asked what had kept him going long after many of his peers had retired.

"It's the anticipation, the expectation, that's what keeps you going," he said. "So many things, it's a miracle. A superior hand has helped in so many moments of my life."