Hundreds of people have been detained at a Moscow rally demanding punishment for police who detained an anti-corruption journalist. 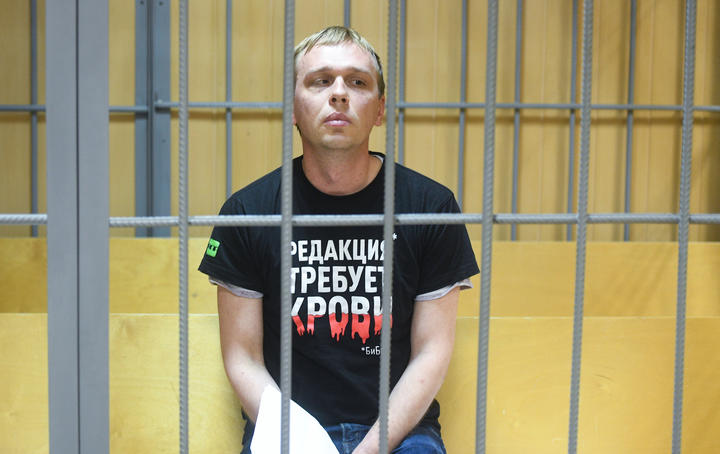 Officers in riot gear clashed with protesters during the unauthorised march in support of Ivan Golunov.

Among those detained at the rally were journalists and Russian opposition leader Alexei Navalny.

Mr Golunov was freed on Tuesday after drug-dealing charges against him were dropped following a public outcry.

Interior Minister Vladimir Kolokotsev said officers who had taken part in his detention would be suspended during an investigation.

Three major Russian newspapers had earlier rallied round the freelance journalist in a rare public show of support.

What happened at the rally?

A monitoring group said more than 400 people were detained, although Russian authorities put the number at closer to 200.

Local media said more than 2500 people had taken part in the rally, although authorities said it was less than half that number.

Protesters waved banners and wore T-shirts with the slogan "I/We are Ivan Golunov" and accused police of using criminal behaviour in arresting the reporter.

A number of journalists at the rally were detained, including protest organiser Ilya Azar of Russian newspaper Novaya Gazeta and several others who were reporting on the demonstration.

Irganiser Ilya Azar is arrested. Just before told me he was disappointed, but not surprised by crackdown.
“Nothing in my country surprises me. But if yesterday, the government showed us a reasonable face. Today it showed us that nothing has changed."

A member of staff from German magazine Der Spiegel was held as well as journalists from Vedomosti and Echo Moscow Radio.

Footage of the arrests and of the crowds gathered in the centre of the city were shared on social media.

Mass arrests have started here. I have seen at least 5 people being dragged off. People shouting “Shame!” and “Who are you serving?!” pic.twitter.com/CConRW9mfG

he march was originally organised to demand Mr Golunov's release but then became a call for those responsible for his initial detention to be held accountable.

The interior minister admitted that Mr Golunov's guilt had "not been proven", and that an internal inquiry had been launched.

"I believe that the rights of every citizen, regardless of his profession, must be protected," he asserted.

Mr Navalny tweeted that the government had become very worried by the "fantastic and unanimous expression of solidarity in the Golunov case" and was now setting about destroying that solidarity and intimidating and jailing those who persevered.

What happened to Ivan Golunov?

Mr Golunov, 36, had been working for the Latvia-based independent news website Meduza, among others. The website was established by Russian journalists from Lenta.ru, who formed their own outlet abroad after a takeover by a new pro-Kremlin owner.

His reporting included coverage of the loan shark business, the earnings of the family of Moscow's deputy mayor, the unusually high cost of public works in the Russian capital, and the alleged censorship of journalists.

Mr Golunov was on his way to meet another journalist in Moscow last week when he was stopped and searched by police officers.

Officers said they had discovered the drug mephedrone in his bag, and more drugs and weighing scales in a search of his home. Reports said he was beaten during his arrest.

The journalist's lawyers and press freedom activists said the drugs had been planted in order to silence the investigative journalist. Much of Russia's media is controlled by the state and Russia is ranked 83rd out of 100 countries for press freedom by Freedom House.

Supporters immediately claimed the journalist was innocent and a victim of fabricated drug charges, which activists say are used against opposition figures and human rights activists by the Russian state.