The head of a major medical research charity has called the latest outbreak of Ebola in central Africa "truly frightening". 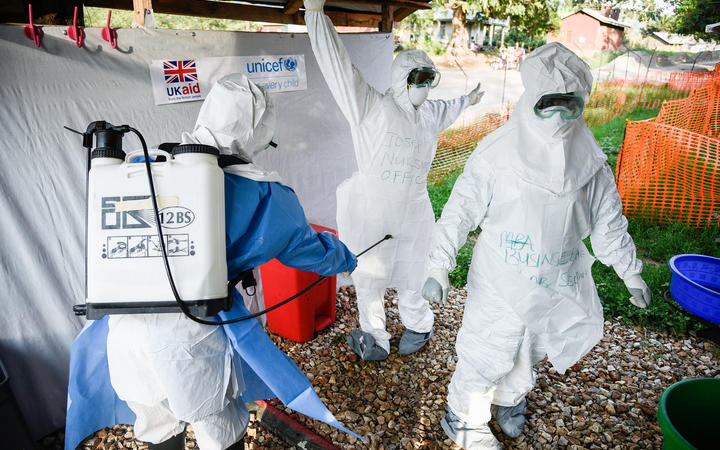 Medical staff of the Ebola Treatment Unit get ready to work during their weekly rehearsal at the Bwera General Hospital in Bwera bordering with the Democratic Republic of Congo, western Uganda, in December. Photo: AFP

Nearly 1400 people have died in the Democratic Republic of Congo.

Dr Jeremy Farrar, the director of the Wellcome Trust, said the epidemic was the worst since that of 2013-16 and has showed "no sign of stopping".

A five-year-old boy has also died in neighbouring Uganda, the first case of Ebola reported in the country.

The Ugandan government is now reporting seven other suspected cases of the virus.

In a statement, Dr Farrar said the spread was "tragic but unfortunately not surprising". He warned that more cases were expected, and a "full" national and international response would be needed to protect lives.

@MinofHealthUG and the @WHO have confirmed a case of #Ebola Virus Disease outbreak in #Uganda. Although there have been numerous previous alerts, this is the first confirmed case in Uganda during the Ebola outbreak on-going in neighbouring Democratic Republic of the Congo. pic.twitter.com/aKq75YfI0I

"The DRC should not have to face this alone," he said.

What's the situation so far?

Since the first case of Ebola in the DRC last August, nearly 1400 people have died - around 70 percent of all those infected.

The outbreak is the second-largest in the history of the disease, with a significant spike in new cases in recent weeks.

Only once before has an outbreak continued to grow more than eight months after it began - that was the epidemic in West Africa between 2013-16, which killed 11,310 people.

Efforts to contain the spread have been hindered by militia group violence and by suspicion towards foreign medical assistance.

Nearly 200 health facilities have been attacked in the DRC this year, forcing health workers to suspend or delay vaccinations and treatments. In February, medical charity Médecins Sans Frontières (MSF) put its activities on hold in Butembo and Katwa - two eastern cities in the outbreak's epicentre.

In Uganda, a five-year-old boy died of the virus on Tuesday, according to the World Health Organisation (WHO).

Officials said his grandmother and younger brother also had the disease. The boy is said to have travelled across the border with his family from the DRC on Sunday. He was then taken to a Ugandan hospital after exhibiting symptoms, including vomiting blood, officials said.

Seven other cases have been confirmed in the country, and Uganda's government said 50 people were suspected to have come into contact with those infected.

What is being done to prevent the spread?

In Uganda, mass gatherings including market days and prayers have been cancelled. Market days in the town of Kasese attract an estimated 20,000 people at the border area.

Uganda's health ministry and the WHO said a rapid response team had been dispatched to identify others at risk and to follow up on eight other possible cases.

The country has already vaccinated about 4700 health workers against the disease, according to a joint statement by WHO and Ugandan health officials.

On Wednesday, WHO head Tedros Adhanom Ghebreyesus said that he would hold an IHR Emergency Committee meeting on 14 June. The group will decide if the outbreak should now be deemed a public health emergency.