by James Glenday of the ABC

For decades, one of the most visited institutions has been searching for something that disappeared from the earth some 66 million years ago. 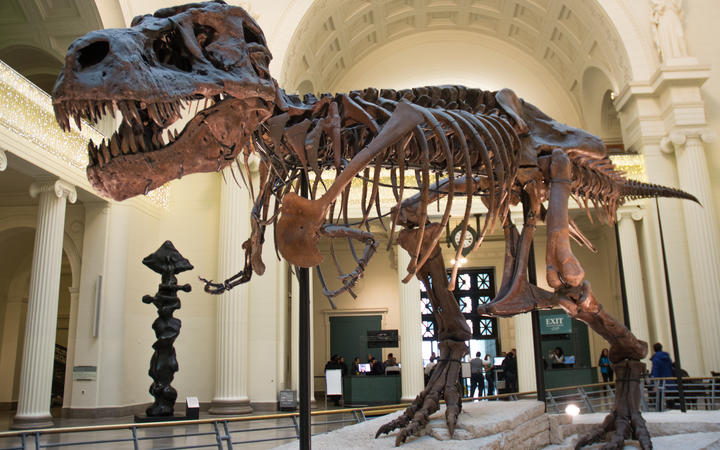 Until now, a Tyrannosaurus rex had escaped the grasp of Washington DC's Smithsonian National Museum of Natural History.

"There are traditionally two ways to get a T-rex," said Kirk Johnson, the museum's director.

"You can buy one or you can find one. We tried both."

The United States' finders-keepers rule means that if you discover the ancient bones of a dinosaur on your property, the skeleton belongs to you.

The Smithsonian spent a substantial amount of time trawling through public land in states like Montana for T-rex bones.

They uncovered pieces and parts of the famed tyrant lizard king, but alas, no complete fossil suitable for display.

"That's not hugely surprising because they are very rare," Mr Johnson said.

However, buying one of the 30 or so substantially complete skeletons did not work out either.

Sue, a beautifully preserved large Tyrannosaurus with teeth the size of bananas, is still known among museum staff as the one that got away.

"The discovery of Sue happened before the movie Jurassic Park, and the sale happened afterwards," Mr Johnson said, reflecting on the dinosaur's 1997 auction in New York that exceeded all expectations. 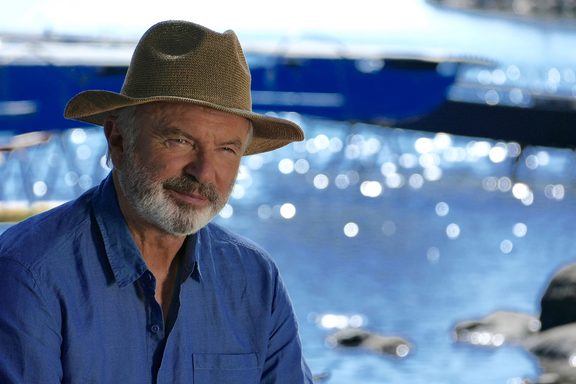 "We weren't the only museum that went with millions [of dollars to spend] and thought it was getting her."

Chicago's Field Museum was the winner and has housed Sue since, but many palaeontologists believe that science has lost out.

The auction made it clear to the nation that dinosaurs were worth a lot of money.

Many collectors started searching, hoping to make a one-in-a-million find.

"It is legal to sell dinosaurs in the United States. In the other big dinosaur-producing nations, the country owns the dinosaurs," Mr Johnson explained.

"If you find bones on your property [here], they're yours. That's made it much more difficult for professionals to access private lands. Dinosaurs are now money."

Fossils, including a baby T-rex, have been put on eBay, and Australian actor Russell Crowe is just one of several high-profile figures to have privately owned a dinosaur skull.

In 2013, actors Nicholas Cage and Leonardo DiCaprio reportedly got into a bidding war over the 67-million-year-old skull of a Tyrannosaurus bataar.

Cage prevailed but was later forced to hand the skull over to US authorities when it emerged it had been smuggled out of Mongolia.

Some private collectors argue that the market for dinosaur bones has helped reinvigorate interest in fossils and palaeontology, leading to more discoveries.

But that claim is disputed.

"The value of dinosaurs and other fossils is that they are information. It's accurate to think of them like books," palaeontologist Thomas Carr said.

"[They're] best placed in museums or university collections, so that scientists have access to read those unique manuscripts that fossils are."

The demand for dinosaur bones also has a dark side.

There are reports of excavation teams returning to their dig sites on public land to find fossils have been stolen.

"A dinosaur is not like a diamond. It's part of our history," said Matthew Carrano, the curator of Dinosauria at the Smithsonian National Museum of Natural History.

"If you go in, dig a hole, grab a dinosaur and leave, then there is little of scientific value because we don't know the context around it."

The Smithsonian finally gets its T-rex

After relying on a replica for decades, the Smithsonian will this weekend unveil its long-awaited star attraction - a real Tyrannosaurus rex skeleton.

The impressive 66-million-year-old specimen is the culmination of a long journey to get the US capital its own lizard king.

The shoulder blade of the Smithsonian museum's T-rex was first spotted by a Montana woman 31 years ago.

Kathy Wankel was fossil fossicking along the Fort Peck Reservoir and took part of the find to famed palaeontologist Jack Horner at the Museum of the Rockies.

He immediately realised it was the first T-rex lower arm bone ever found.

Because the reservoir is controlled by the US Army Corp of Engineers, the T-rex belongs to the American Government.

"So, everyone knew we were searching, we found a third way to get a T-rex," Mr Johnson said.

"The Museum of the Rockies had two specimens and the Army Corp and the museum both saw great benefit in sending this one to Washington DC, so we worked out a 50-year loan and got it delivered by FedEx."

In Montana, the bones were displayed in pieces, showing visitors what it looked like in the ground.

Now, its toothy skull is dramatically poised to tear the head off a hapless Triceratops - a posture designed to simultaneously stun and stimulate scientific interest.

It has been dubbed "the nation's T-rex".

"It's not the oldest or the biggest or the youngest or the longest. But it will probably be the most visited. It belongs to the nation," said Mr Carrano.

T-rex is a 'gateway drug' to science

Chicago's Field Museum, which has developed a savvy social media presence for Sue, ignited a light-hearted rivalry with the Smithsonian's newest acquisition.

Happy Friday to everyone but meteors. pic.twitter.com/pUs9dMddXB

"As the most complete, best-preserved rex ever discovered, I've spent the past two decades allowing scientists and museum-goers from all over the world to rejoice in my enormous, pristine fossil body," it tweeted.

"I'm comfortable referring to myself as 'the world's T-rex' and I welcome fealty from the magnificent DC murder bird."

For the Smithsonian Institution, it is all good publicity.

The museum is expecting its new attraction to lead to a big spike in visitors and hopes the nation's T-rex will inspire the next generation of scientists.

"It is a gateway drug," Mr Johnson said.

Mr Johnson said there was still so much to learn about dinosaurs.

"All the good fossils are still waiting to be found. I know they are out there,' he said.