Sudanese soldiers have attacked a pro-democracy protest outside the military headquarters in the capital Khartoum in the deadliest violence since the overthrow of President Omar al-Bashir in April. 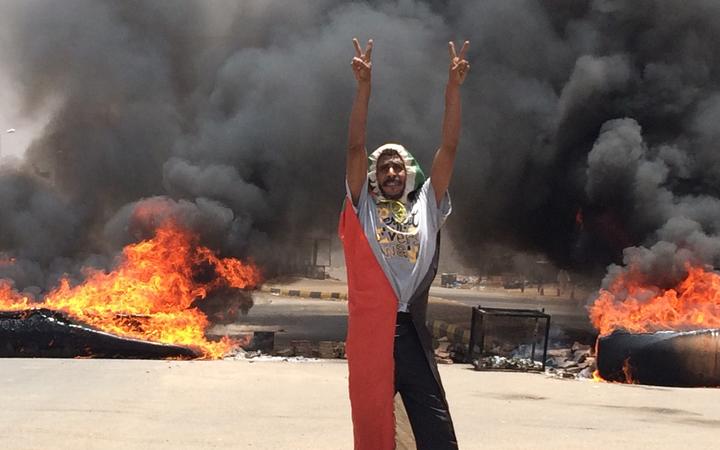 A protester in front of burning tyres and debris on the road near Khartoum's army headquarters. Photo: AP

Opposition-linked medics said more than 35 people were killed in the attack which was rapidly condemned by African and Western nations.

Sudan has been governed by a military council since the overthrow of the president. The pro-democracy movement is demanding a civilian government take over.

Footage shared on social media and verified by Reuters showed chaotic scenes of people fleeing through streets as sustained bursts of gunfire crackled in the air.

As protests unfurled, demonstrators in Khartoum hurled stones at security forces, who charged amid sounds of intense gunfire. One video posted on social media showed a protester collapse to the ground, crying in pain after being hit by what appeared to be live fire.

Witnesses said a sit-in next to the Defence Ministry, the focal point of anti-government protests that started in December, had been cleared. Protesters poured onto streets elsewhere in Khartoum and beyond in response, setting up barricades and roadblocks with rocks and burning tyres.

A group of doctors linked to the opposition said 35 people had been "martyred" in Monday's violence, with the toll expected to rise because not all casualties had been accounted for. The group had earlier said at least 116 people were wounded.

The main protest group accused the ruling military council of perpetrating "a massacre" as it broke up the camp.

"The Transitional Military Council regrets the way the situation unfolded, reaffirming its full commitment to the ... safety of the citizens and renews its call for negotiations as soon as possible," the council later said in a statement.

Monday's violence is likely to deal a blow to hopes for a restart to stalled talks and a negotiated settlement over who should govern in a transitional period after President Bashir's overthrow. Sudan's public prosecutor on Monday ordered an investigation into the violence, state news agency SUNA said.

An alliance of protest and opposition groups that had been negotiating with the military for weeks said it was halting all contact with the council.

The TMC had offered to let protesters form a government but insisted on maintaining overall authority during an interim period. Demonstrators want civilians to run the transitional period and lead Sudan's 40 million people to democracy.

The protest-linked doctors group said security forces had surrounded one Khartoum hospital and had opened fire at another where they were pursuing protesters.

"The protesters holding a sit-in in front of the army general command are facing a massacre in a treacherous attempt to disperse the protest," said protests organiser the Sudanese Professionals Association.

"What is clear to us is that there was use of excessive force by the security forces on civilians," UN spokesman Stephane Dujarric said.

Britain's ambassador Irfan Siddiq said he heard gunfire for more than an hour from his residence. "No excuse for any such attack. This. Must. Stop. Now," he wrote on Twitter.

"Responsibility falls on the TMC. The TMC cannot responsibly lead the people of Sudan," added the US Embassy.

The European Union urged a speedy transfer of power to civilians, while the African Union called for an immediate investigation, and Amnesty International urged sanctions on those officials responsible.

Neighbouring Egypt called for "calm and restraint", while the United Arab Emirates (UAE) said it hoped that dialogue would prevail in Sudan.

"The regional experience has taught us that the orderly and conservative transition of the state and its institutions is the only way to avoid years of chaos and loss," Minister of State for Foreign Affairs Anwar Gargash said on Twitter. 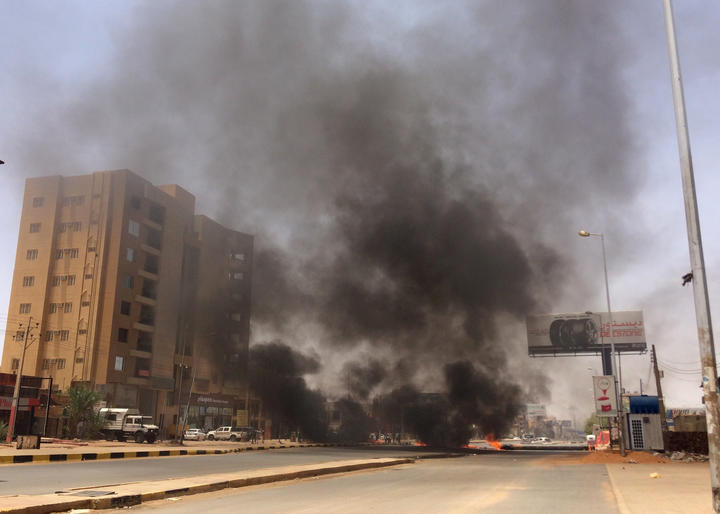 The RSF is commanded by General Mohamed Hamdan Dagalo, the military council's deputy head. General Dagalo, known as Hemedti, is a close ally of the United Arab Emirates and Saudi Arabia and sent Sudanese troops to join the coalition they lead in Yemen's civil war. The UAE and Saudi Arabia are eager to root out Islamists who dominated in Sudan under Bashir's three-decade rule.

The military's role in ousting Omar al-Bashir has raised fears among many Sudanese that their country could follow a similar path to neighbouring Egypt after its 2011 uprising.

There, a military council oversaw a turbulent and sometimes violent transition before army chief Abdel Fattah al-Sisi led the overthrow of Egypt's first freely elected president, Mohamed Mursi. Mr Sisi was elected president in 2014 and again in 2018 with 97 percent of the vote.