The captain of a vessel that collided with a tour boat on the Danube river in Budapest, resulting in at least seven deaths, has been arrested. 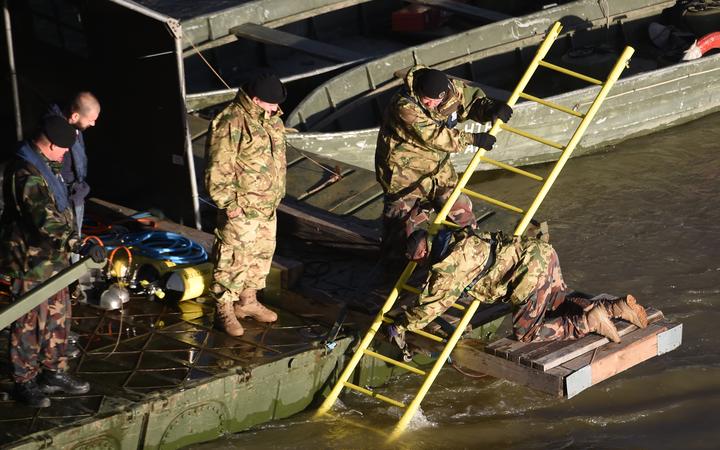 Hungarian Army staff on the Danube river in Budapest during the recovery of the capsized sightseeing boat. Photo: AFP

Police said the 64-year-old Ukrainian national was held as a suspect over reckless misconduct in waterborne traffic leading to mass casualties.

Hopes have faded that any of the 21 people missing will be found alive.

It was not immediately clear which vessel was responsible for the collision, a rare incident on the Danube where navigation is busy but generally safe.

The boat that sank - Hableany, or Mermaid - and a larger tour boat - Viking Sigyn - collided near the Margit Bridge in central Budapest about 9pm local time.

"The whole thing happened very quickly" said Clay Findley, a US tourist who was on the Viking Sigyn.

"I thought at first we were going to miss it, but the front of the Viking hit the back of that little boat... and then the hull popped up on the opposite side of the ship, just a few seconds later, and then it was down."

Another passenger, 66-year-old Ginger Brinton from the US, told AFP news agency that he was on the boat's balcony when he "saw people in the water, screaming for help".

"We never felt any bump. We didn't realise. We just saw people in the water. It was just terrible."

No one on the Swiss-registered Viking Sigyn was injured. 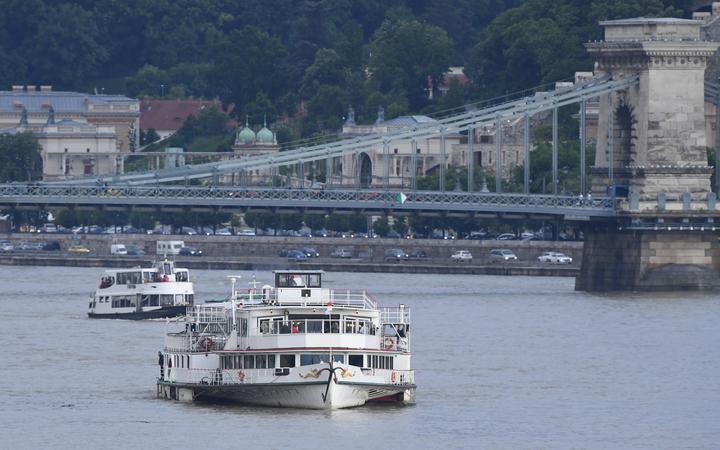 Sightseeing cruises are seen on the Danube river. Photo: AFP

Emergency crews found the wreckage of the Mermaid, a double-decker river cruise boat built in 1949 in the former Soviet Union, on the riverbed near the Margit Bridge and were preparing to lift it.

Thirty South Korean tourists and three tour guides, as well as two Hungarian crew, were on board the Hableany.

Most of the tourists were aged between 40 and 50 but the group also included a six-year-old child and a man in his 70s, South Korea's Yonhap news agency reported.

The seven rescued alive included a 31-year-old passenger identified only by her surname Jung, who told Yonhap: "The current was so fast and people were floating away."

Another survivor, a 32-year-old woman named as Yoon, said: "The boat flipped instantly and capsized."

The rescue operation continued with boats, divers, spotlights, and radar scanning along the river, where the temperature of the water was between 10C and 12C.

But teams warned that, as more time passed, the strong currents caused by heavy rainfall would carry people further downstream, lessening the chances of finding survivors.

The seven confirmed victims were not wearing life jackets and three of them were found several kilometres from the site of the collision, police said.

South Korea Foreign Minister Kang Kyung-wha and other officials and rescue teams left for Budapest on Thursday. Relatives of the passengers were also travelling to Hungary.

Meanwhile, flowers were laid outside the country's embassy in Budapest and candles were lit on the Danube bank.

Earlier, South Korean President Moon Jae-in said his government planned "to co-operate with the Hungarian government to thoroughly investigate the cause of the accident".

For South Koreans, the sinking is a painful reminder of the Sewol disaster in 2014, the BBC's Laura Bicker in Seoul reports.

The ferry of that name sank off South Korea's Jindo island, killing 304 people, almost all of them schoolchildren on a trip. The ship's captain was later convicted of murder.