British Brexit Party leader Nigel Farage has had a milkshake thrown at him while campaigning ahead of the EU elections. 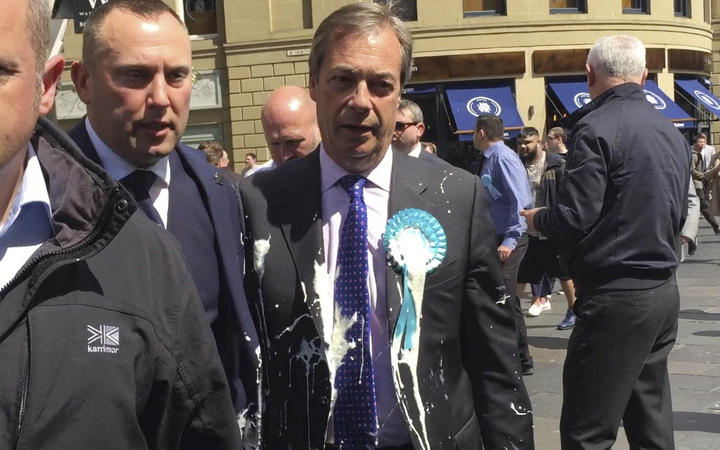 Brexit Party leader, formerly the leader of UKIP (the UK Independence Party) after he was hit by a milkshake during campaigning. Photo: Tom Wilkinson/PA via AP

The conservative politician - who was instrumental in campaigning for Britain to leave the EU - had just given a short speech in Newcastle as part of a tour of the country ahead of Thursday's European elections when the frothy beverage was launched at him.

Paul Crowther, 32, from Throckley, Newcastle, said it was a £5.25 Five Guys banana and salted caramel milkshake.

"I was quite looking forward to it, but I think it went on a better purpose," he said.

Standing in handcuffs outside a branch of Waterstones, Mr Crowther said he did not regret his actions.

"I didn't know he [Mr Farage] was in town, I thought this is my only chance.

"It's a right of protest against people like him. 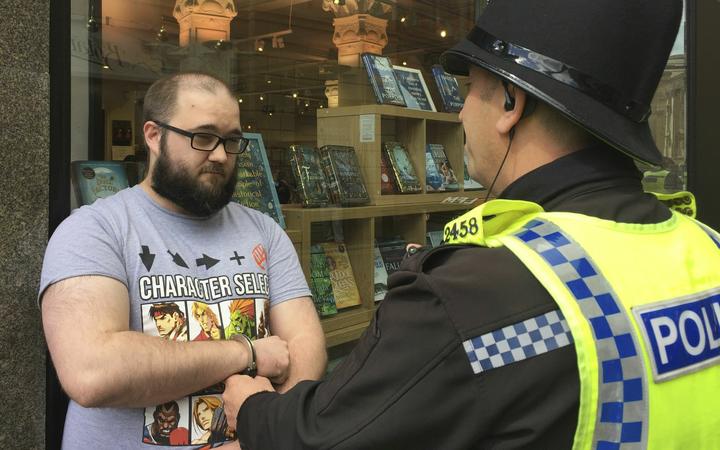 Paul Crowther speaks to police after Nigel Farage was hit by a milkshake. Photo: Tom Wilkinson/PA via AP

"The bile and the racism he spouts out in this country is far more damaging than a bit of milkshake to his front."

He denied an allegation that someone was cut, saying he only threw liquid on the politician.

Northumbria police said a 32-year-old man had been arrested "on suspicion of common assault" and remained in police custody. He was dragged away after the dairy-based attack by a police community support officer.

Mr Farage was heard to comment to his security staff "complete failure ... I could have spotted that a mile off" and "how did you not stop that?" as he was ushered away.

He is the the latest victim of a protest which has seen other European election candidates such as UKIP's Carl Benjamin and ex-English Defence League leader Tommy Robinson suffer similar attacks.

One of Mr Farage's team was also heard to say "sorry" as he was walked to his taxi then driven away from the event, where he had met voters by the city's Grey's Monument.

He later tweeted: "Sadly some remainers have become radicalised, to the extent that normal campaigning is becoming impossible.

"For a civilised democracy to work you need the losers' consent, politicians not accepting the referendum result have led us to this."