Video footage has shown Hollywood star Arnold Schwarzenegger being attacked at an event in South Africa. 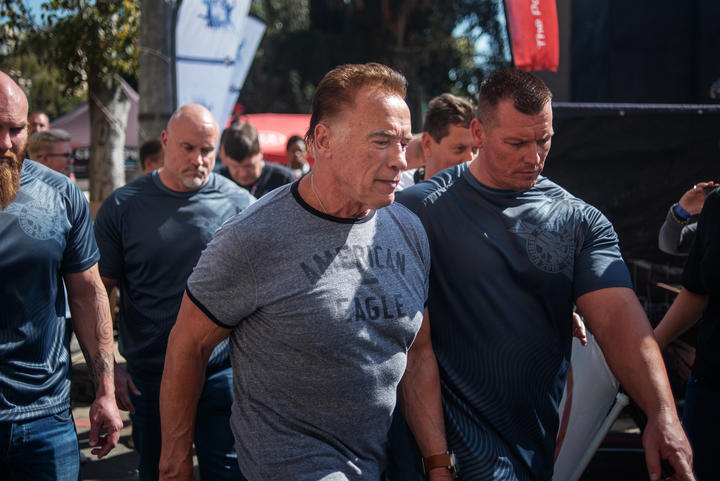 Arnold Schwarzenegger urged fans to focus on the athletes at the even instead of the attack. Photo: AFP

The 71-year-old former California governor was interacting with fans during a skipping competition at his Arnold Classic Africa sporting event when a man drop-kicked him from behind.

The attacker is seen being restrained following the incident.

Schwarzenegger thanked fans on Twitter for their concern, but insisted there was "nothing to worry about".

And if you have to share the video (I get it), pick a blurry one without whatever he was yelling so he doesn’t get the spotlight.

By the way... block or charge? pic.twitter.com/TEmFRCZPEA

The video footage, shared widely on social media, shows Schwarzenegger posing for photos and filming at the Johannesburg event on Saturday when the man attacks him with a flying kick.

The Terminator star stumbles forward after the kick, while the attacker falls to the ground, where he is immediately restrained by a security guard.

The man was later handed over to police officers, event officials said.

Schwarzenegger tweeted to his more than four million followers: "I thought I was just jostled by the crowd, which happens a lot. I only realised I was kicked when I saw the video like all of you."

He later urged fans to focus on the athletes at the event instead of the attack.

"We have 90 sports here in South Africa at the @ArnoldSports, and 24,000 athletes of all ages and abilities inspiring all of us to get off the couch. Let's put this spotlight on them," he wrote on Twitter.

The Arnold Classic Africa event takes place every May and features a range of events including bodybuilding and combat sports.