Australians have begun voting on Saturday in the first general election since political infighting ousted the nation's fourth leader in a decade. 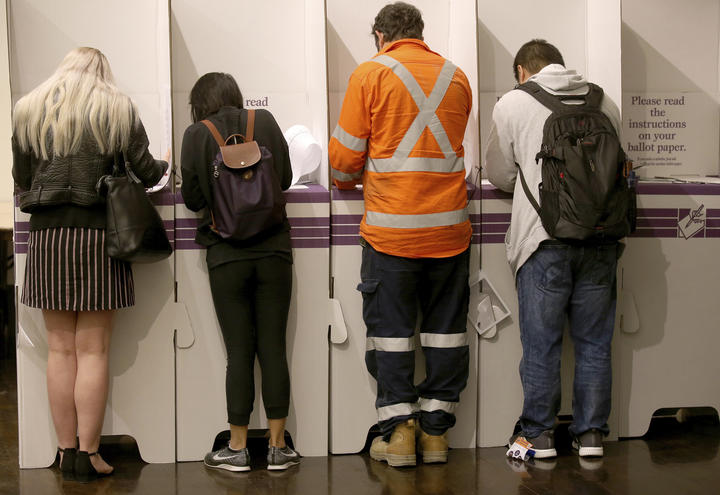 Voters fill in their ballots at the Town Hall in Sydney. Photo: AP / Rick Rycroft

Prime Minister Scott Morrison said he has united his conservative government in the nine months since he replaced Malcolm Turnbull.

Australia has mandatory voting and a record 16.4 million enrolled voters.

Both leaders were out early at polling booths on Saturday, in a last-ditch pitch for votes.

The nation holds elections every three years, but no prime minister has succeeded in serving a full term since 2007.

The poll takes place just two days after the death of Bob Hawke, a long-serving former prime minister whose achievements have been hailed across the political spectrum.

Surveys have shown that the economy, cost of living, environment and health are central concerns for voters.

It is in many ways a generational issue election, experts say, with younger people in particular voicing frustration about climate change and a lack of affordable housing.

Others have argued that older Australians would be most affected by tax reform proposals that have dominated much of the campaign.

It follows fierce debates in the past year about the rolling leadership turmoil, formal recognition of indigenous Australians, and the treatment of female MPs in parliament.

Who are the contenders?

As the Liberal-National government seeks its third term, Mr Morrison claims to have healed bitter internal divisions that brought down Mr Turnbull.

He has campaigned primarily on economic issues, often doing so alone while painting the election as a choice between himself and Mr Shorten.

Mr Shorten, who has led Labor for six years, has instead emphasised his team's stability and policies on climate change, cost of living and health.

Also vying for support are minor parties including the Greens, One Nation and the United Australia Party, as well as a raft of independents.

How does the vote work?

Australian elections always take place on Saturdays. This time about 7000 polling stations have been set up across the nation, the Australian Electoral Commission (AEC) says.

But people can vote early at pre-polling stations, and a record number - more than four million people - have elected to do so in 2019.

Because voting is compulsory, anyone aged over 18 faces a $A20 fine for not taking part.

At the last election, 95 percent of Australians voted - a much higher proportion than the most recent US (55 percent) and UK (69 percent) polls.

Opinion polls have consistently put Labor in front on a two-party preferred basis, but the gap has narrowed closer to the election.

This is despite the same measures showing that Mr Shorten trails Mr Morrison as preferred prime minister.

Voting closes on Saturday at 1800 local time in each Australian state and territory - the first results will be expected soon afterwards.