The BBC has sacked Danny Baker, saying he showed a "serious error of judgement" over his tweet about the Duke and Duchess of Sussex's baby. 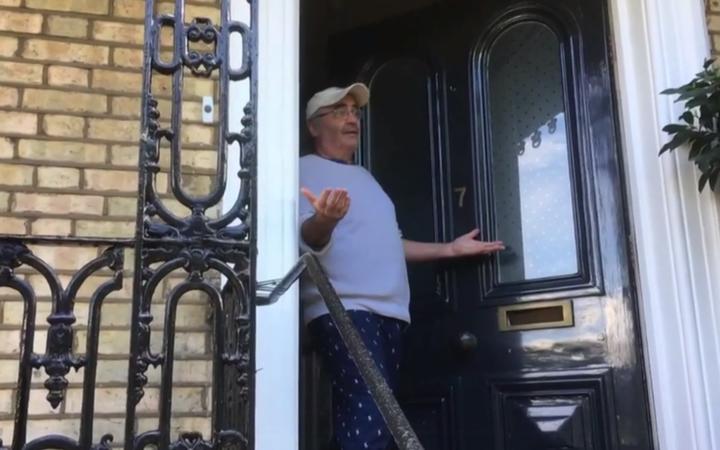 The tweet, which he later deleted but which has been circulated on social media, showed an image of a couple holding hands with a chimpanzee dressed in clothes with the caption: "Royal Baby leaves hospital".

The BBC 5 Live presenter was accused of mocking the duchess's racial heritage.

Mr Baker claimed it was a "stupid gag".

The 61-year-old presented a Saturday morning show on the network.

The corporation said Baker's tweet "goes against the values we as a station aim to embody".

It added: "Danny's a brilliant broadcaster but will no longer be presenting a weekly show with us."

His comment about red sauce references the Sausage Sandwich Game from his 5 Live show, in which listeners choose what type of sauce a celebrity would choose to eat.

After tweeting an apology, in which he called the tweet a "stupid unthinking gag pic", Baker said the BBC's decision "was a masterclass of pompous faux-gravity".

"[It] took a tone that said I actually meant that ridiculous tweet and the BBC must uphold blah blah blah," he added. "Literally threw me under the bus. Could hear the suits' knees knocking."

After the initial backlash on social media on Wednesday, Baker said: "Sorry my gag pic of the little fella in the posh outfit has whipped some up. Never occurred to me because, well, mind not diseased.

"Soon as those good enough to point out its possible connotations got in touch, down it came. And that's it."

In a later tweet, he added: "Would have used same stupid pic for any other Royal birth or Boris Johnson kid or even one of my own. It's a funny image. (Though not of course in that context.) Enormous mistake, for sure. Grotesque.

Just got fired from @bbc5live.
For the record - it was red sauce. Always.

Speaking to reporters outside his home, he said of the tweet: "Ill advised, ill thought-out and stupid, but racist? No, I'm aware how delicate that imagery is."

Broadcaster Scarlette Douglas, who works on 5 Live podcast The Sista Collective and The One Show, told the BBC: "I think somebody told him, 'What you've tweeted was incorrect, so you should maybe say something or take it down.'

"Yes, OK, he took it down, but his apology for me wasn't really an apology. I don't think it's right and I think subsequently what's happened is correct."

Ayesha Hazarika, a commentator and former adviser to the Labour Party, told 5 Live she was "genuinely gobsmacked" by the tweet.

"You can't just say sorry and then carry on like it's business as usual. When you have an incredibly important platform like he does, you do have to think about what you do and the signals that it sends out."

Baker must have been aware of recent incidences of racism at football matches and the resulting outcry, Ms Hazarika added.

Linda Bellos, former chairwoman of the Institute of Equality and Diversity Professionals, echoed those remarks. saying: "A lot of black players are complaining about noises being made to them. He knows this stuff," she told Radio 4.

His tweet was "foolish", she said, adding: "Never mind that it's royalty.

"The things that are happening to black children up and down the country are not enhanced by his words and I'm glad that prompt action has been taken, and let's hope we have come thoughtful dialogue and learning from this."

It's the second time Baker has been axed by 5 Live and is the third time he has left the BBC.

In 1997, he was fired for encouraging football fans to make a referee's life hell after the official had awarded a controversial penalty in an FA Cup tie.

He later claimed he had never incited fans to attack the referee, only that he would have understood if they had.

In 2012, two weeks before he was inducted into the Radio Hall of Fame, he was was back in the news after an on-air rant in which he resigned and branded his bosses at BBC London "pinheaded weasels". The outburst came after Baker had been asked to move from a weekday programme to a weekend.

In 2016, Baker took part on I'm a Celebrity... Get Me Out Of Here but was the first person to be voted off in the series.