Chinese and US negotiators are resuming trade talks in Washington amid the threat of fresh tariffs and warnings over the global economy. 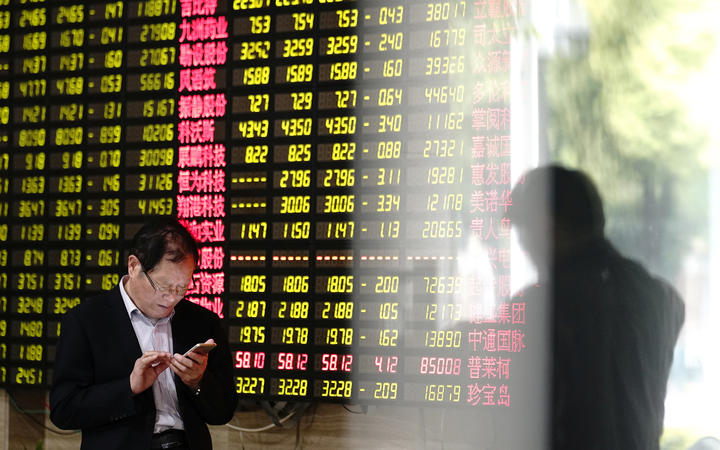 Stock prices at a brokerage house in Shanghai on Monday. Stock markets around the world have had a torrid week with investors seeking safer assets. Photo: AP

President Trump says he will raise tariffs on $US200 billion of Chinese goods on Friday with his officials accusing China of reneging on promises.

China has said it will respond with "necessary countermeasures".

The International Monetary Fund (IMF) said the row poses a "threat to the global economy". In a statement it called for a speedy resolution and said everybody loses in a protracted trade conflict.

The two sides had appeared to be making progress until recently but uncertainty now surrounds whether the talks will succeed. Negotiations were scheduled for around 10am (NZT) and the new US tariffs were due to begin just seven hours later.

President Trump also said he received a "beautiful letter" from Chinese counterpart Xi Jinping and that they would probably speak soon.

How does the US see it?

China has been a frequent target of Donald Trump's anger, with the US president criticising trade imbalances between the two countries and Chinese intellectual property rules he says hobble US companies.

Ahead of the discussions, he told a rally China had "broke the deal". He has also threatened to raise tariffs on $US200bn worth of Chinese goods this week and introduce new ones.

What sparked his actions, which apparently took China by surprise, is unclear.

US sources told Reuters news agency that last week China returned a draft agreement with changes that undermined its commitments to address key US demands.

Tariffs are taxes paid by importers on foreign goods, so the tariff imposed by the US on Chinese goods would be paid by American companies.

How has China responded?

China denies backtracking and has said it "keeps its promises".

If the US tariffs go ahead, the Chinese have said they will retaliate in kind.

"The Chinese side deeply regrets that if the US tariff measures are implemented, China will have to take necessary countermeasures."

Each side has hinted that the other has more to lose. At the rally Mr Trump said if no deal was struck there was "nothing wrong with taking in more than $100bn a year" while China's state-run Global Times said China was "much better prepared" than the US.

The proposed US measures were due to come into force around 5pm (NZT) on Friday and will see rates on a vast array of Chinese-made electrics, machinery, car parts and furniture jump from 10 percent to 25 percent.

China and the US are the world's biggest economies so deterioration in their relations will inevitably have an impact beyond their borders.

The two have already imposed tariffs on billions of dollars worth of one another's goods, creating uncertainty for businesses and weighing on the global economy.

Stock markets around the world have had a torrid week with investors seeking safer assets.

The IMF has said the escalation of US-China trade tension was one factor to have contributed to a "significantly weakened global expansion" late last year as it cut its 2019 global growth forecast.