A US Army, who prosecutors say plotted to detonate a nail bomb at a white nationalist rally, has been arrested following an FBI online sting operation. 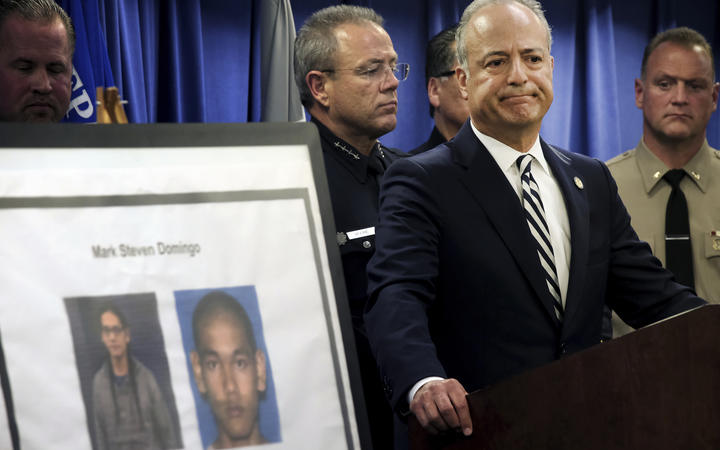 US Attorney Nick Hanna stands next to photos of Mark Steven Domingo during a news conference. Photo: AP / Richard Vogel

Mark Steven Domingo, 26, a US Army infantryman who fought in Afghanistan and later converted to Islam, was taken into custody on Friday after being given what he thought was a live bomb to use in the attack, law enforcement officials said.

"This investigation successfully disrupted a very real threat posed by a trained combat soldier who repeatedly stated he wanted to cause the maximum number of casualties," US Attorney Nick Hanna said in the statement.

Mr Domingo was charged in a federal criminal complaint with providing and attempting to provide material support to terrorists and was scheduled to make an initial appearance in US District Court in Los Angeles later today (US local time). It was not immediately clear if he had retained an attorney.

According to the criminal complaint, in internet conversations with an undercover FBI source, Mr Domingo expressed support for a violent jihad and expressed willingness to become a "martyr", making reference at different points to the 2013 Boston Marathon bombing and 2017 shooting rampage at a Las Vegas country music concert.

Mr Domingo contemplated drive by shootings and detonating a bomb at the Santa Monica pier, before deciding to detonate an improvised explosive device at a 28 April rally in Los Angeles that he believed was organised by white nationalists.

An FBI spokeswoman confirmed that the rally took place as scheduled on Sunday.

In an FBI affidavit filed in the case, Mr Domingo said he specifically purchased three-inch nails because they would be long enough to penetrate the human body and puncture internal organs. He allegedly arrived at one meeting with the man armed with an AK-47-style assault weapon.

Mr Domingo and the confidential informant visited the planned site of the rally to scout the best location to place explosives to cause the greatest casualties, authorities said.

He could face a maximum sentence of 15 years in federal prison if convicted.

The announcement comes two days after a gunman opened fire in a San Diego synagogue, killing one person and wounding three others. John Earnest, 19, was taken into custody in the shooting.

There was no indication that the two incidents were connected.