Passengers are stranded in India and around the world after Jet Airways suspended all international flights. 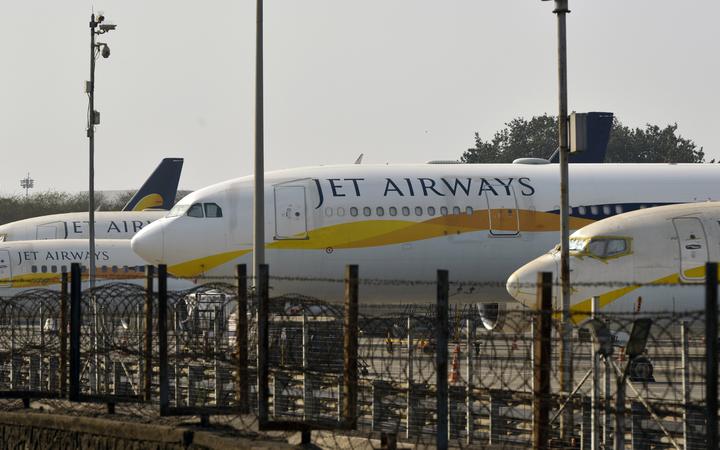 Jet Airways aircraft are seen parked on the tarmac at Chattrapati Shivaji International Airport in Mumbai on March 25, 2019. Photo: AFP

Flights from London, Paris and Amsterdam are among those grounded amid fears about the survival of India's largest private airline.

The airline cancelled all international flights until Monday when, according to reports, it will meet its lenders again to try to secure funding.

Jet Airways is saddled with more than $1bn debt.

It is seeking a financial lifeline to avoid collapse and, on Thursday, grounded 10 planes over unpaid fees to leasing firms.

These were the latest flights to be grounded and it was not clear how many of its fleet of more than 100 planes was still in operation. Local reports suggested that it was barely a dozen.

The airline flies on 600 domestic and 380 international routes - but carriers in India must maintain a fleet of least 20 aircraft to continue to operate international services.

From London, the airline initially confirmed it had cancelled its flights between London, Paris and Amsterdam and India for 12 April, but later said that all international flights would be cancelled between 12 and 15 April.

It said it "regrets the inconvenience caused" to its passengers and was "working to minimise guest inconvenience".

"In parallel, the airline's management and its key stakeholders including its consortium of lenders, continue to work closely towards resolving the current situation," it said.

There was no statement about the status of domestic flights.

Sandeep Kooner and her three children had been expecting to be on a flight from London to India on Friday evening to attend her niece's wedding in Punjab.

But the 40 year old who lives in Walsall will now miss the first few days of the week-long celebrations after her Jet Airways flight was cancelled.

"I had just sat down in the nail salon when I got a text message to say my flight had been cancelled," she told the BBC.

She has now arranged to fly with Air India, but that will be days later and to Delhi - an eight hour drive to her destination - rather than a local one.

Television channels in India reported that the prime minister's office had called for an urgent meeting to discuss the airline.

They also reported remarks by government officials saying Jet Airways only had funds to operate six to seven aircraft over the weekend.

India's Aviation Minister, Suresh Prabhu, had tweeted that his ministry would "review issues related to Jet Airways" and "take necessary steps to minimise passenger inconvenience and ensure their safety".

Directed Secretary @MoCA_GoI to review issues related to #JetAirways. Asked him to take necessary steps to minimise passenger inconvenience and ensure their safety.

The UK's Civil Aviation Authority said it was aware flights had been suspended.

Jet Airways owes money to employees and suppliers and in recent weeks it has grounded aircraft and cancelled thousands of flights as its financial strains worsened.

The pilots union in India is planning a protest on Saturday and has written to the airline demanding that employees are paid. Staff of the airline were pictured by Priyanka Iyer of Business Television India marching to the company's headquarters in Mumbai.

#JetAirways staff walks to Mumbai HQ to seek clarity on salaries and their job security. Ground staff has not been paid since a month and Association may file an FIR against the co and the management if no clarity is given. @jetairways @TheOfficialSBI @BTVI #JetAirwaysCrisis pic.twitter.com/f8UHNJzjTP

The airline was founded by Naresh Goyal more than 25 years ago and he and his family currently own 52 percent of the airline, although that majority stake is expected to be lost as lenders' restructure the debt.

A consortium of investors led by the State Bank of India (SBI) took control of the airline in March.

The group is searching for a new investor to acquire a stake of up to 75 percent in Jet Airways. The deadline for bids had been extended to Friday, according to reports.

Ellis Taylor, deputy Asia editor of Flight Global, told the BBC the airline was in a "precarious position".

"The interim lifeline that the carrier talked about two weeks ago looks like it won't materialise any time soon, and that really leaves its future looking bleak," he said.

There were reports in local media that India's aviation ministry might review the regulations setting the fleet cap, which could allow the airline to resume international services.