British stand-up comedian Ian Cognito has died on stage during a performance. 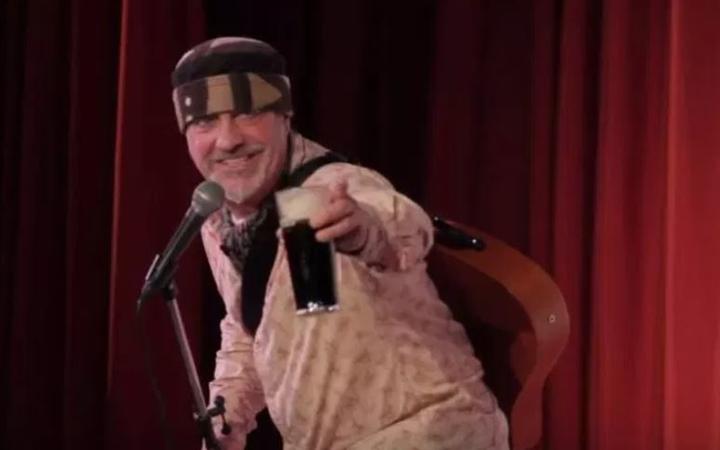 The 60-year-old comic sat down on a stool while breathing heavily, before falling silent for five minutes during his show on Thursday (Friday NZT).

Compere Andrew Bird said the crowd at the The Atic bar in Bicester, England had thought it was a joke, and continued to laugh, unaware something was wrong.

Mr Bird, who runs the Lone Wolf Comedy Club event at the venue, said Cognito had not been feeling well before the gig started, but insisted on going on stage.

"He was like his old self, his voice was loud. I was thinking 'he's having such a good gig'," Mr Bird said.

Mr Bird said Cognito had even joked about his health during his set, telling the audience: "Imagine if I died in front of you lot here."

It was Mr Bird who first went on stage to check if his fellow comedian was ok.

"Everyone in the crowd, me included, thought he was joking," he said.

"Even when I walked on stage and touched his arm I was expecting him to say 'boo'."

Once it became clear something was wrong, two off-duty A&E nurses and a police officer began chest compressions and an ambulance was called.

Audience member John Ostojak said: "Only 10 minutes before he sat down he joked about having a stroke.

"He said, 'imagine having a stroke and waking up speaking Welsh'."

Mr Ostojak said: "We came out feeling really sick, we just sat there for five minutes watching him, laughing at him."

Mr Bird said dying on stage would have been the way the veteran comic "would have wanted to go", "except he'd want more money and a bigger venue".

Cognito, whose real name was Paul Barbieri, was born in London in 1958, and had been performing since the mid-1980s.

Fellow comedians have paid tribute, describing him as a "proper comic" and praising his support for up-and-coming acts.

Eight Out Of Ten Cats presenter Jimmy Carr paid tribute to Cognito, saying: "I'll never forget his kindness when I started out..."

Veteran stand-up comedian Ian Cognito has died on-stage - literally. The audience thought it was part of the act. Died with his boots on. That’s commitment to comedy. I’ll never forget his kindness when I started out & how god damn funny he was.

Oh bless that Ian Cognito, who expired in his natural home last night, on stage. He was a difficult awkward hilarious troubled brilliant sort; a proper comic.

Rufus Hound said on Twitter: "We have lost one of the greats".

Shappi Khorsandi said it was "such a sad shock", and Cognito was "one of the people who made this job brilliant".

Such a sad shock. Ian Cognito has died. One of the people who made this job brilliant from the very beginning has gone. I got so excited to be on bills with him and watch him work and have a beer after. And those eyes! Those beautiful eyes. Much love to all friends and family xx

Little Britain actor and comedian Matt Lucas wrote he was "in shock at the news", and described Cognito as "brilliant and provocative and entirely original on stage".

We're all very sad to hear of the passing of the legendary Ian Cognito. He was original, always hilarious, sometimes offensive and the true definition of 'one of a kind'. R.I.P Cogs x pic.twitter.com/KxV7hyTt6b

Cognito, who was based in Bristol, won the Time Out Award for stand-up comedy in 1999.

Mr Bird said: "He acted like he was bitter on stage, but he was nothing like that.

"He was in it for the love of stand-up."