US actress Felicity Huffman says she will plead guilty to charges in a cheating scam aimed at acquiring places for children at elite universities. 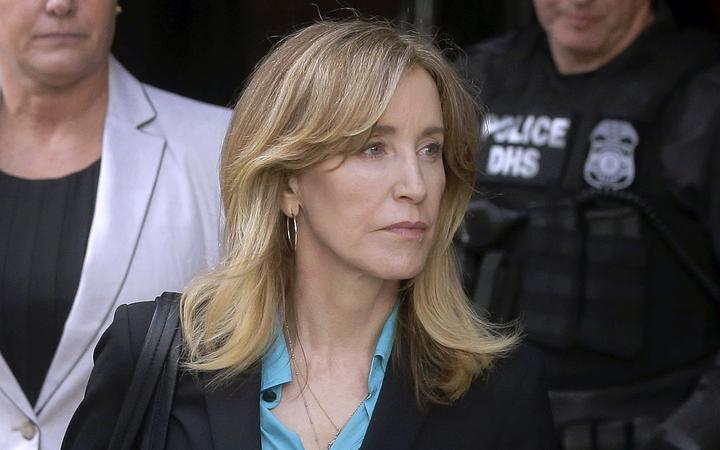 The Desperate Housewives star said she had "betrayed" her daughter and was "ashamed" of the pain she had caused.

Ms Huffman is accused of paying $15,000 to have her daughter's exam questions covertly corrected in 2017.

The 56-year-old is one of 14 people set to plead guilty among the 50 charged, who include college athletic coaches.

In a statement, she said: "I accept full responsibility for my actions and will accept the consequences that stem from those actions.

"I am ashamed of the pain I have caused my daughter, my family, my friends, my colleagues and the educational community.

She added in the statement that her daughter had known nothing about her actions: "In my misguided and profoundly wrong way, I have betrayed her. This transgression toward her and the public, I will carry for the rest of my life."

The FBI code-named the investigation "Operation Varsity Blues" - ironically named after a 1990s film about the pressures of sports scholarships.

The current case relates to the period between 2011 and 2018, when investigators say parents tried to cheat the usual US admission process.

They say parents paid bribes, had exams altered and even had their children edited on to stock photos to pretend they played sports.

Ms Huffman and another Hollywood actress, Lori Loughlin, are the most high-profile figures indicted, but others charged include prominent business executives.

Ms Loughlin is accused along with her husband of paying nearly $500,000 in bribes to get their two daughters admitted to the University of Southern California.

The Loughlins are not among those who have agreed to plead guilty and have not publicly addressed the allegations, the Associated Press (AP) news agency reports.

Investigators say the parents helped their daughters get in on rowing scholarships, even though neither student had actually participated in the sport.

Ms Huffman was accused of paying $15,000 to William "Rick" Singer - the confessed mastermind of the alleged scam - to have her daughter's exam questions covertly corrected in 2017.

She has agreed to plead guilty to a charge of conspiracy to commit mail fraud and honest services mail fraud, AP reports.