A national park in Florida has captured a record 5.2m python using an innovative approach to tackling the invasive species. 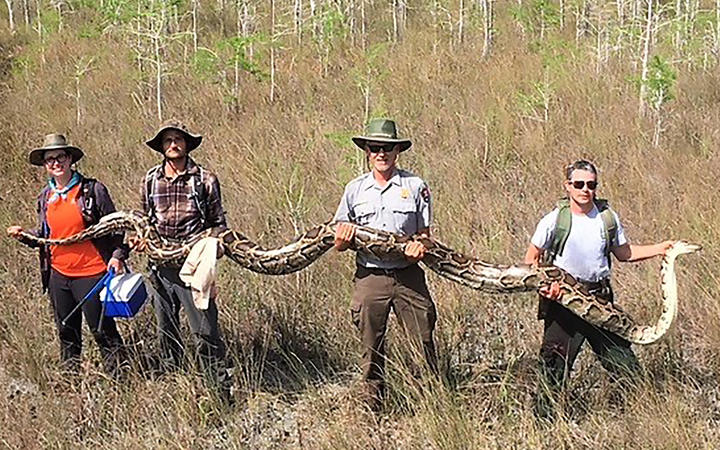 The female snake, the largest ever to be removed from Big Cypress National Preserve, weighed 63.5kg and was carrying 73 developing eggs.

Pythons pose a major threat to native wildlife in the state.

Researchers in the park track down breeding females by fitting male pythons with radio transmitters.

"The team tracked one of the sentinel males with the transmitter and found this massive female nearby," the park said on Facebook.

As well as removing invasive snakes, Big Cypress said it uses each discovery to collect data for research, develop new removal tools and learn how pythons are using the area.

The Burmese python has been considered an invasive species since it was first spotted in Florida's Everglades in the 1980s.

The species is native to Asia but some pythons are believed to have been released into the wild in Florida as overgrown pets, while others escaped from a breeding facility destroyed by Hurricane Andrew in 1992.

The snakes have no natural predators in Florida and the United States Geological Survey (USGS) said they have contributed to "drastic declines" of midsized mammals.

Tens of thousands of Burmese pythons are currently estimated to be living in Florida's Everglades.